I’ll admit it, I’m slightly obsessed with caves.  It’s the adventure of it.  Traveling deep into the earth, not knowing what you will find.  Often these caves are hidden in plain sight.  Exploring them is like being let in on a secret not known by many.  So, when a friend of ours offered to take us to one of these hidden caves we jumped at the chance.

My family met up with our friend and his son, jumped in a car together, and drove the short distance to a pull off along the road.  It’s a busy road, connecting two major roads in our county.  I drive on the road quite often, zipping past homes, lakes, restaurants, and a school never realizing there is a large cave  just out of sight.  The trees are dense here, but this time of year, with the leaves all long gone you can peer back into the woods and spot tall cliffs.  In front of the cliffs the ground heaves up creating small berms and rocky rolling hills.  These berms hide the secret of what lays beyond the road and forest.

We got out of the car, grabbed flashlights, headlamps,  magnets, and were off, walking down a wooded path that followed a small stream.  Immediately we came upon stone walls lining the stream and realized that the stream was man-made.  Soon we recognized other signs of human involvement on the landscape around us.  The berms, although now covered in small trees and undergrowth, are really just rocks piled up by human hands.  The path we hiked was a short train track.  The afternoon sun filtered through the branches and shone on rusty metal objects that lay scattered among the leaves and downed trees around us.  The cave we were heading to was actually a mine where magnetite and hematite were mined in the late 18th century.  The ore was transported to nearby furnaces and smelted into shot for use in the Revolutionary War. 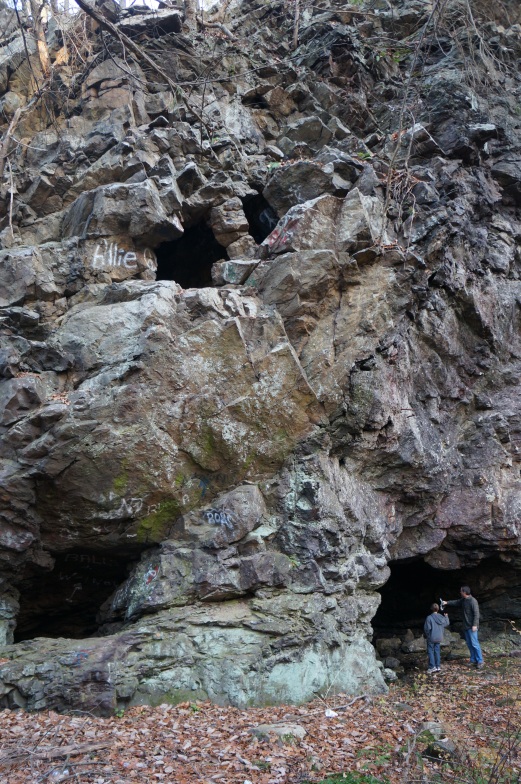 Water filled the entrance of the cave, but there were enough rocks to step on that we were able to walk back deep into the cave.  All of us but my four-year old.  I heard a wail coming from behind me and turned to find her standing in about five inches of water!    I helped her onto a rock and we continued on when I heard an excited screech from my other daughter who was heading up our exploration team.  Soon we all joined her and stood, peering into the murkiness, amazed by what we saw.  The cave opened up here; the ceiling was a good  20 feet above us.  We stood on dry ground now but to our left the tunnel filled again with a couple of feet of water.  To our right the ground sloped steeply up to an opening high up on the cliff. An air shaft maybe?

My husband shined his flashlight in front of us and we spotted a deep pit filled with water.  The water was so crystal clear and still that it was impossible to tell where the air ended and the water began.  The pit seemed endless as we shined our flashlights into the water, attempting to see the bottom.  This underground stope cavity went down at least 70 feet and probably extended out for a long distance underneath where we stood.  This is where the ore was mined and then brought to the surface and out of the mine.

We explored the mine some more and then headed outside.  The cliffs continued on and all around were pits and piles of rocks that was extracted from the mine.  Our friend bent down and unearthed a dark stone.  He put it up to our magnet and it stuck!  This was the mine’s magnetite.  Pieces of it were everywhere. 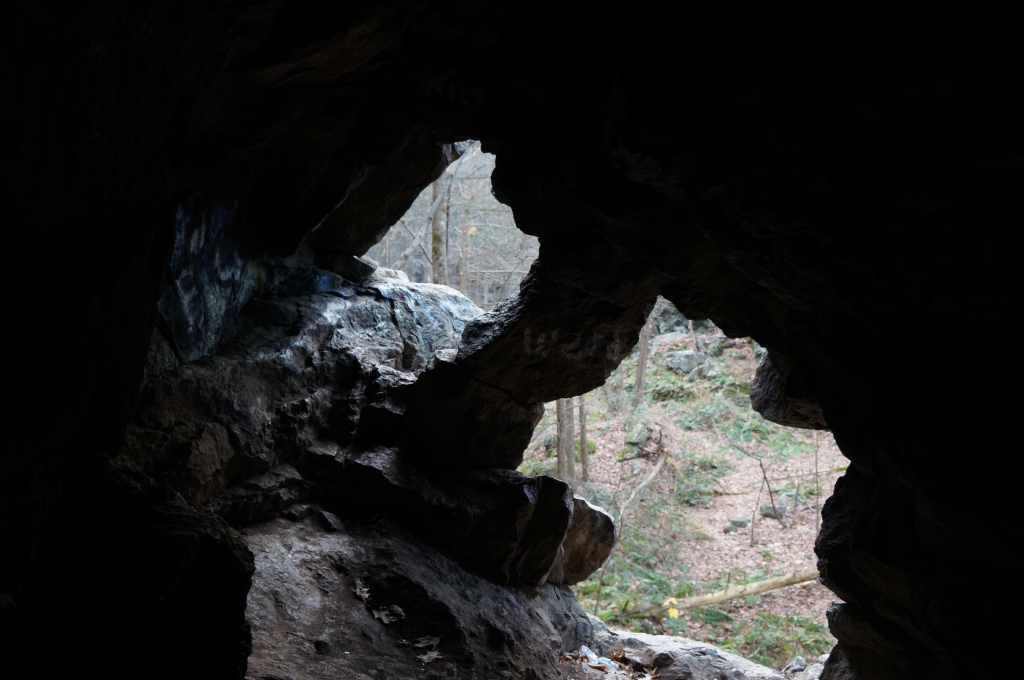 We turned to leave when the November sun dipped below the cliffs .  As everyone hiked out, I stopped and looked back.  A few dried leaves rustled in the trees and a plane flew overhead, but otherwise it was quiet.  The tall cliffs muffled all noise.  Standing there in the fading light it was hard to imagine the once bustling mine that was here.  All that activity and production and now…nothing.  Just a cliff with a hole in it slowly filling with water.  Each passing year the trees grow taller, dirt and duff cover the ore, and weather causes more rocks to fall; erasing signs of human activity.  I wonder how many of the people who live in the homes on this road even realize that this cave is here.  How many know the history of the area.

I walk out and meet the others on the road.  Cars zoom by.  I look back and the cave is gone; the cliff barely visible through the trees and berms.  The secrets of the land here are only available for those willing to stop, get out, and explore.  Secrets told only to those seeking.  Those who realize there is always more than what is seen.