We were completely alone.  I don’t even know how that was possible given how crowded the park was, but here we were alone.  All was quiet except for the birds, wind in the pines, and of course, the river.  The river,never quiet, just tirelessly moving forward.

Craving a day without crowds we had hiked back to a schoolhouse in the middle of the woods.  The drive was a bit out of the way and then the hike required a climb up a steep road still closed off for the season, but it was worth it when we realized nothing was around.

Just us and the school. 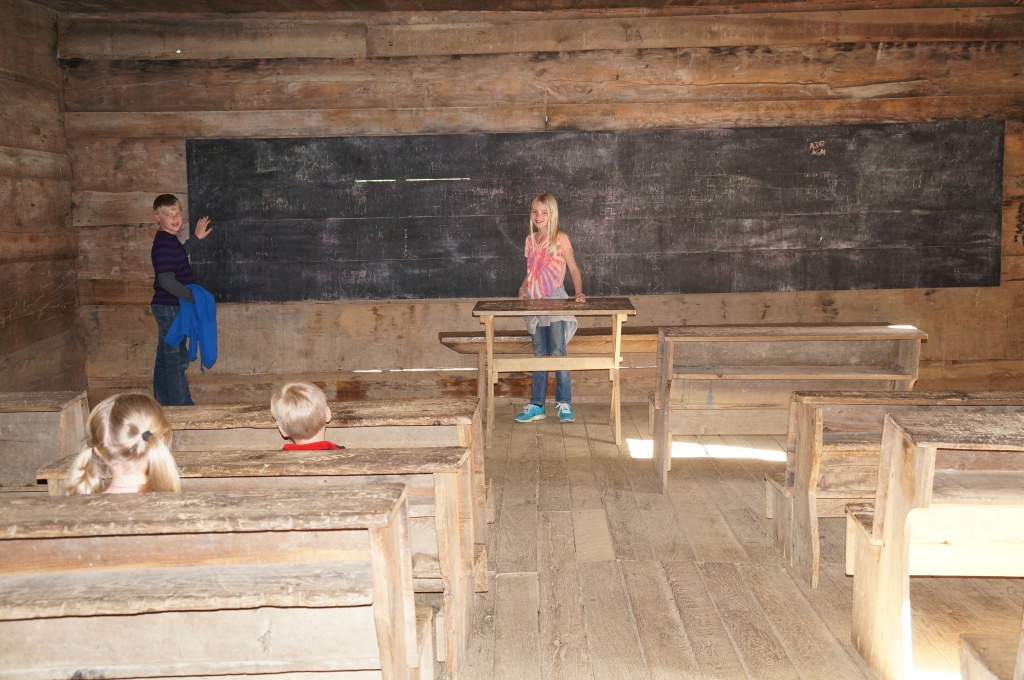 My kids ran inside and began to play school.  My older two teaching the younger two while they sat at the century old desks.  An one room schoolhouse being such a foreign concept to them; to me!

My husband and I walked around the perimeter of the school and read all of the names and dates that had been carved into the school walls.  Graffiti, defacing property, but now neat to have since many names went back decades!  Some of the names were even those of kids who had attended the school all those years ago.  So we read and wondered about those kids and their families and what life would have been like living in the Smoky Mountains one hundred plus years ago.

There was a cemetery there as well because the school also doubled as a church.  Families would gather together on Sunday mornings, I imagine happy to see other humans.  They came from miles around, mountain men and farmers trying to eek out a living in the unforgiving mountains.  Sundays were spent worshiping God then catching up on gossip as their kids ran around the yard.  Now all that’s left are the graves, many so worn from weather that they are now unreadable.

Yet, as I stood there in front of the school, listening to the laughter of my kids and the never-ending sound of the river, I could easily be transported back to that time over one hundred years ago.  With no sign of the 21st century around, the area had a timeless quality.  Just us and the trees, the dirt road and wooden schoolhouse, the screech of the hawk overhead.  And the schoolhouse, there to greet the next generation of kids.