The space between Christmas and New Years was gloriously empty! Nothing on the calendar, just empty days waiting to be filled.  So I decided it was time to take the kids on a little adventure.   But, our outing ended up with a little more adventure than I attended it to!

Secaucus, New Jersey.  Located in Hudson County just miles from New York City, it’s not exactly the wilderness.  Yet it is located within the New Jersey Meadowlands, a large area of wetlands.  Our destination was not the marshes that surrounded the town nor one of the factories that we passed.  Our destination was Snake Hill (aka Laurel Hill or Graffiti Hill or Fraternity Rock), a massive hill of diabase rock jutting 150 feet into the sky from the banks of the Hackensack River.  It’s a familiar sight to anyone who travels the NJ turnpike as it protrudes out over the eastern spur of the turnpike.

The history of Snake Hill, now mainly known as Laurel Hill, is interesting.  From 1855 to 1962 the hill, then over 200 feet tall, was home to numerous Hudson County penal and charitable institutions including an insane asylum.   During an addition to the New Jersey Turnpike a potters field was unearthed.  More than 10,000 graves were discovered, the largest disinterment in US history.  The hill is also the inspiration for Prudential insurance’s rock logo.   You can read more about the history of the area here.

Our own adventure had us navigating through the results of the ongoing changes to Snake Hill.  After driving back roads of industrial building after building we reached our destination to start our exploration of the area, a dinosaur park?!!  I pulled the car to a small parking area and we got out looking around.  We peered through the large fences that surrounded the dinosaur park to view huge life-sized dinosaurs.  The grounds were torn up and there was construction equipment everywhere.   Signs on the fence said the area was closed due to an environment cleanup.  It felt very Jurassic Park-ish.  I noticed the “No Parking” signs but since there was no place else to go, I stayed and hoped the car would still be there when we got back. 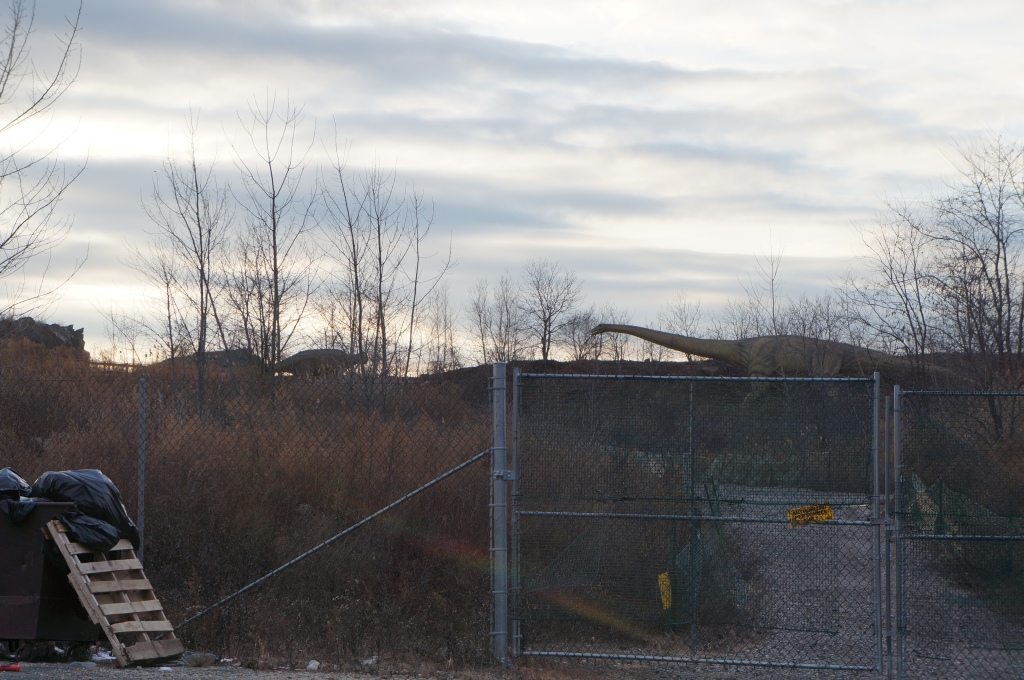 We walked, following the fence and came to massive piles of mulch.  My kids named it Mulch Mountain and attempted to scale it to the top.  It looked like a whole forest had been cut down to wood chips!  Continuing on we entered some trees and soon came to a giant brick smoke stack rising high above the forest.  Here the hill started.  A fence ran along the south end of the hill.  Probably state property on the other side because there, we were just hundreds of yards from the NJ Turnpike.  Cars zoomed past but we were completely hidden in the trees.  The trail had ended where the fence began and I looked up, realizing that our only way to the top of the hill now was to follow the fence…straight up!

I looked at my kids knowing this was not going to be easy.  The hill was insanely steep here, but we never back down to a challenge!  So, up we went.  The only way up was to hold onto the fence and pull yourself up.  The ground was covered in leaves and the soil under them was damp and slippery.  My 7-year-old took the lead, pulling himself up the hill quickly.  I stayed in the rear so that if my 5-year-old slipped and fell she would land on me.  It was slow going (except for my 7-year-old!), but we made it to the top.  Looking back down, I decided that we would have to find another way down.

The trail started again at the top of the hill.  We followed it and soon came out of the trees to views on either side of us.  To the south was the Turnpike and, past that, NYC and to our north were dinosaurs and the ball fields of Laurel Park.  Just beyond the park were the wetlands of the Meadowlands.  Very different views on either side, but both beautiful in their own way. 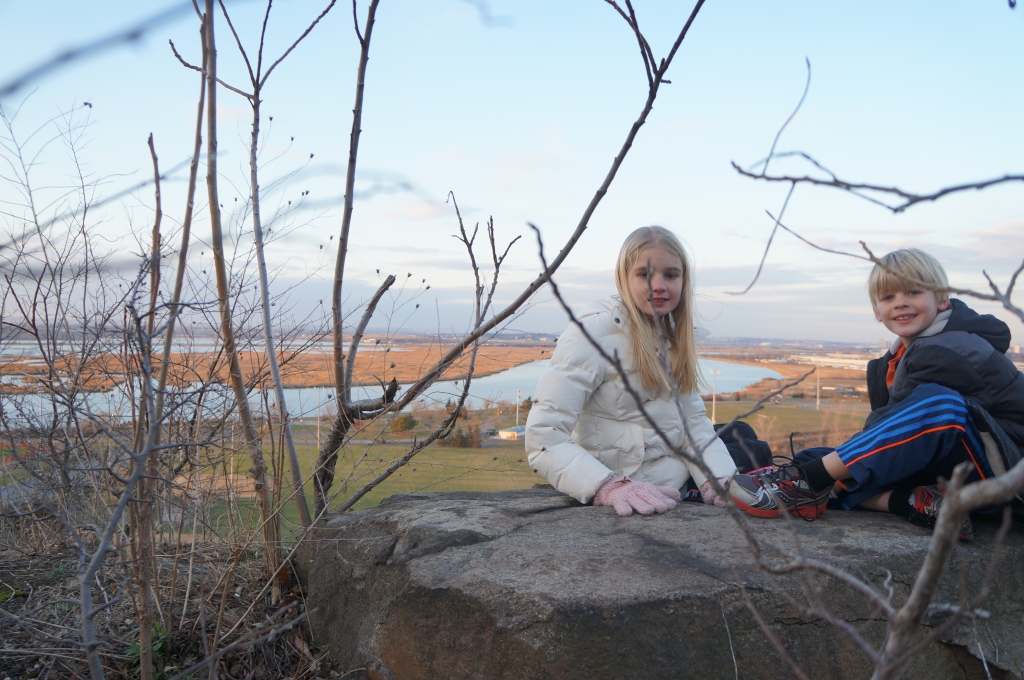 The trail was narrow with the cliff on either side dropping steeply down.  At some points it was only a foot or two wide.  I scanned the area for another way down.  A trail to the right ran down the hill right into the closed dinosaur park.  That was an option until I saw that the main entrance to the dino park was guarded by a security truck and below us, in Laurel Park, was a K9 police vehicle.  We would not be able to get down that way!  So, we continued on.

The overlooks on top of the hill were amazing.  Such beautiful views of industry and urban alongside the never-ending marshes of the area.  So much water here!  Plane after plane flew nearby, preparing to land at Newark airport and surrounding us was the constant sound of traffic on the Turnpike.  Cars and trucks heading home as the sun sunk lower in the sky.  I noticed the darkening day but still wanted to reach our ultimate destination, a flagpole atop the highest part of the hill. 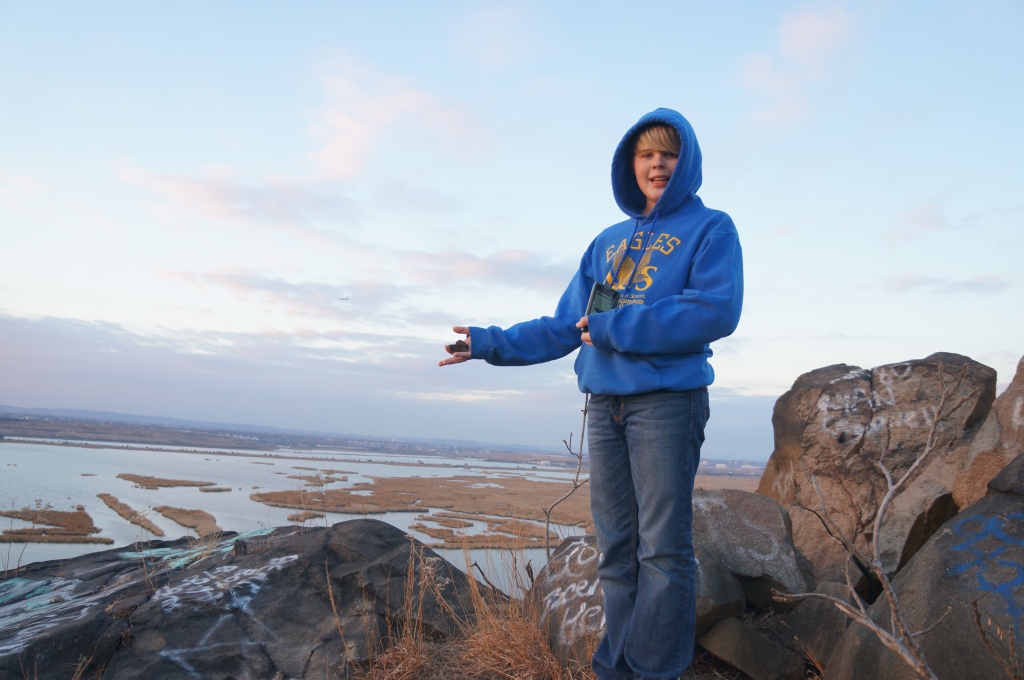 The hill here grew steep again with no real trail, just rocks to climb up and over.  Maybe not the ideal climb for some kids, but I knew mine could do it because they had been hiking and climbing since they could walk.  So onward we went, climbing over the steep graffiti-covered cliffs.  We reached the flag pole as the sun turned to a red orb low on the horizon.  After taking in the views and the accomplishment it was time to head back in an attempt to outrun the approaching darkness.

As we started back I realized that there was no way back but the way we had come from!  Parts of the west end of the hill, my last hope, had been blasted away from construction and we didn’t have much time left anyway.  We made it to the fence on the hill without incident.  I gazed down the hill wondering if it would be easier to just scoot down, but the kids had already started the decent. Clinging to the fence, they made their way down, with feet often in the air.  I put my 5-year-old behind me and down we went.  She did great!  No complaining and no major spills.  I told her that she was the best 5-year-old hiker ever! 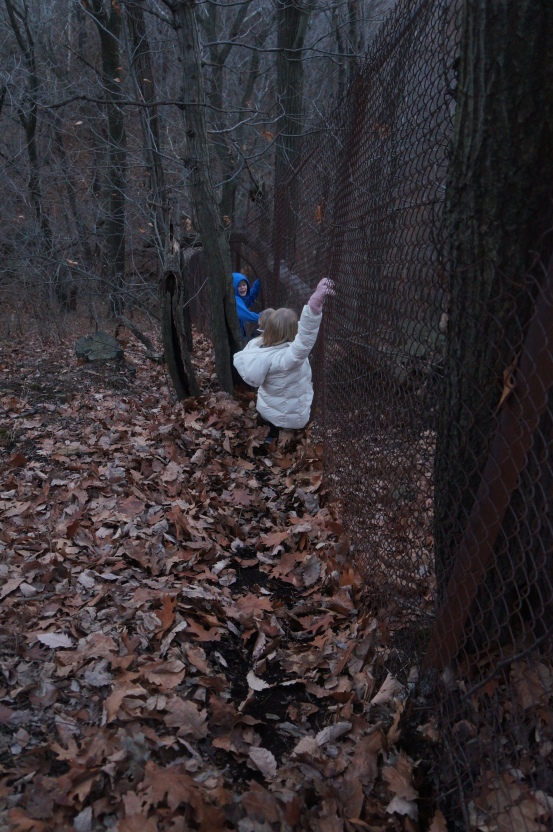 We reached the foot of the hill as the woods grew murky.  My son found a severed human leg (fake!), maybe from the dinosaur park or maybe from something we’d rather not know about!  We headed out past Mulch Mountain and alongside the  dinosaurs.  The area took on an eerie feel in the failing light; I sure hoped my car was still there.

I breathed a sigh of relief as we rounded the last corner; it was there!  We piled in tired and hungry, but happy!  Another adventure in the most unlikely of places!

2 thoughts on “adventure on snake hill”