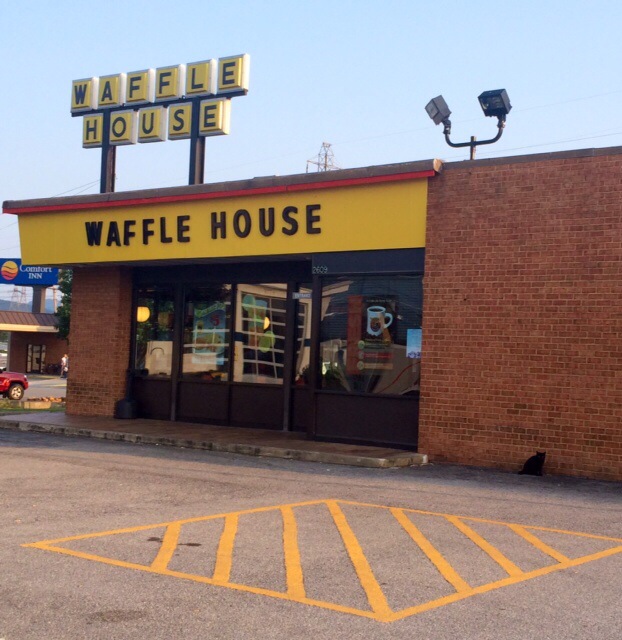 The road trip. It’s everyone’s dream; a topic of movies and songs and books. A summer must-do. We all have such a romantic view of it. Driving down back roads to never-before seen sights, singing your favorite songs, meeting new people, and trying the local food- what can be better?

But, reality is often very different! Especially with kids!

I had to go back to New Jersey for a few days. My husband stayed home, so it was just me and my three youngest kids (my oldest son was at camp). A road trip to New Jersey! This could be fun…well, define “fun”.

We started out early in the morning. While still in the house I gave the standard pee-now-because-I’m-not-stopping lecture and we were off. I only had to go back to the house once because we had forgot some things; not bad considering.

We made it about an hour and a half before our first bathroom break. I stopped at a fast food place and my kids preceded to scare a woman working there to death. She came into the bathroom while we were in it and found my daughter doing a handstand against the wall (“I put paper-towels down first”, she told me). Then, when the woman opened the door to leave the bathroom, my son jumped out from behind the door thinking it was us, grabbed her, and yelled “boo!”. Time to leave!

We made it all the way until 10am before the “I’m starving” whines began. I threw back some yogurts and my youngest daughter managed to cover her clothes and hair in yogurt while opening it. First mess down!

The who-gets-the-iPad fighting began, it was time to get out of the car, so after one more bathroom stop it was time for lunch. I found a cute little diner and as we walked in I realized my daughter with her yogurt covered hair looked like Ramona Quimby; awesome.

I made sure we used the bathroom again at the diner and we were off, hopefully for a nice long stretch this time. A half hour later miss yogurt-hair told me she had to go to the bathroom. I brought back out the I’m-not-stopping-you-just-went lecture. Five minutes later she was crying because she had to go. My oldest daughter told her to go in a cup. I started to explain that only works with boys then decided to drop that conversation.

So, I took the next exit which brought us to middle of nowhere Tennessee- perfect! I pulled off in an empty lot, handed my daughter a napkin, and told her to get out. My friend called just then so I talked with her while I stood by my daughter who managed to pee all over her foot and flip flop. Still on the phone, I grabbed a water bottle and squatted down to clean her foot. Out of the corner of my eye I saw lights and realized that a police car had pulled on next to us.

I told my friend I had to go and walked over to the cop who was concerned that something was wrong. I explained that it was just a bathroom emergency and we were all good. He was a very nice guy and we had a conversation about New Jersey for a bit while my daughter cleaned her shoe.

Back in the car, we made it another hour when a Starbucks sign called to us. I stopped and we all refueled and, of course, used the bathroom. I attempted to brush my daughters hair but it was hopeless. A few minutes after we were back on the highway I looked back at her and there was chocolate all over her face from her chocolate chip drink; a lovely addition to the yogurt.

I had just got back into my driving groove when my son started complaining that his seatbelt was too tight so I told him to unbuckle and rebuckle. All of a sudden he started screaming that the seatbelt was stuck. I told my older daughter to go back and help him with it. She did and told me we needed to stop because he was stuck. Meanwhile his screams and crying were getting louder and louder. I pulled off the next exit, parked in a gas station, and got in the back of the car to check out the situation.

His seatbelt was unbuckled but he had somehow managed to wrap it around his stomach. The belt was pulled tight and there was no slack. Every time he moved it dug deeper into his stomach. We tried to pull it over him, then down him-nope. I read the manual to see if there was a way to release the seatbelt-nope. We then laid the seat back to see if that would work- no go. Meanwhile his cries were getting louder and louder. 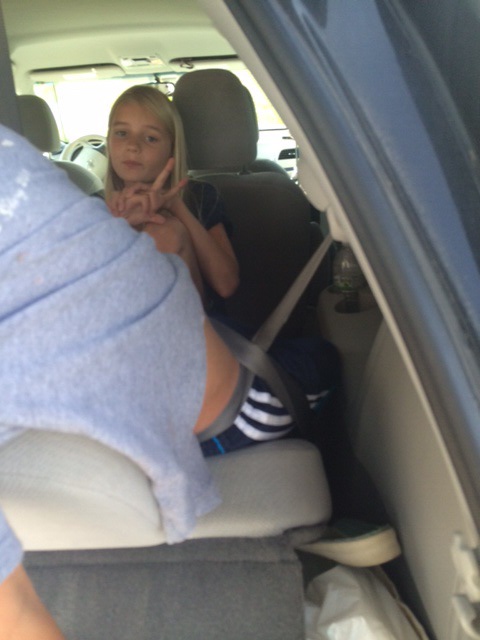 I called my husband, texted him a couple pictures of the situation, and asked him what to do. He suggested spinning my son like a cart-wheel to untwist the seatbelt but it was just too tight. Finally he said just call 911, so I did.

A few minutes later a police car, ambulance, and rescue squad came screeching into the parking lot. They jumped out, messed with my son for about 30 seconds, and then just cut the belt. He was free! One guy told me that he had been doing this for 20 years and this was a first! No one could figure out what he had done to get the seatbelt wrapped around him like that.

I thanked them, called my husband to tell him our son was free, and hit the road. Two of the three kids fell asleep so all was finally fairly quiet. We made it two hours (a record!) before the next bathroom stop. By then it was time for dinner. I began looking for a nearby non-chain restaurant, a place where all the locals go (always my favorite places), but then decided instead on cheap (I had just listen to three Dave Ramsey podcasts in a row) and fast (three kids).

Waffle House it was. A non-existent restaurant in the Northeast, but everywhere in the South. I figured if we are now Southerners we had to eat at a Waffle House. So we did and it was exactly how I thought it would be…I’ll leave it at that. 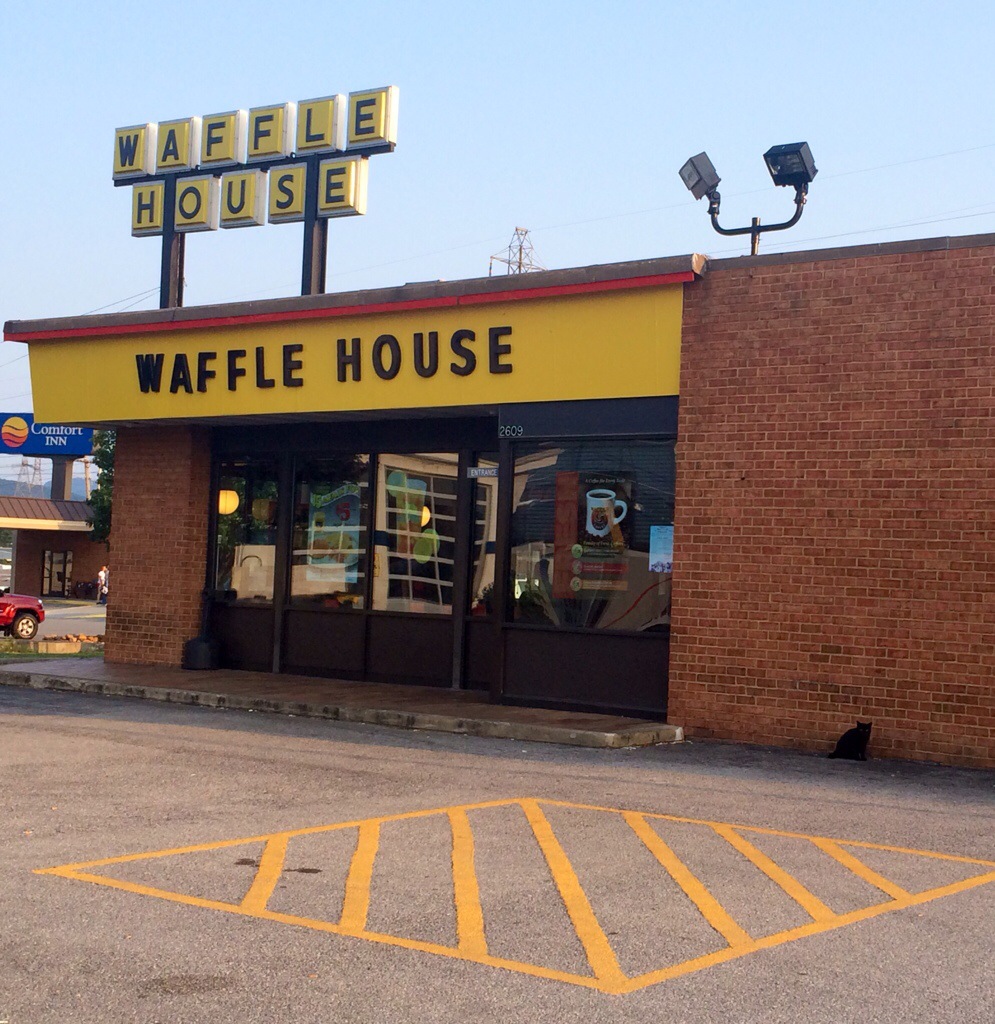 Back in the car for our final hour and a half drive to the hotel I cranked up the tunes and we all sang along. As the sun set behind the mountains and a crescent moon appeared, I had to laugh. It had been a good road trip after all. A classic trip. Local food, people, interesting places, (interesting bathrooms?), good tunes and conversation (topics included burping, what words does mom say the most often, traveling at the speed of light, whose garbage was on the floor, and a comparison of cuts and scars), a couple run ins with the law…what more could you want?

Grimy and tired, we arrived at the hotel. The day had been full; a day to remember. And that, I think, is what road trips are all about.