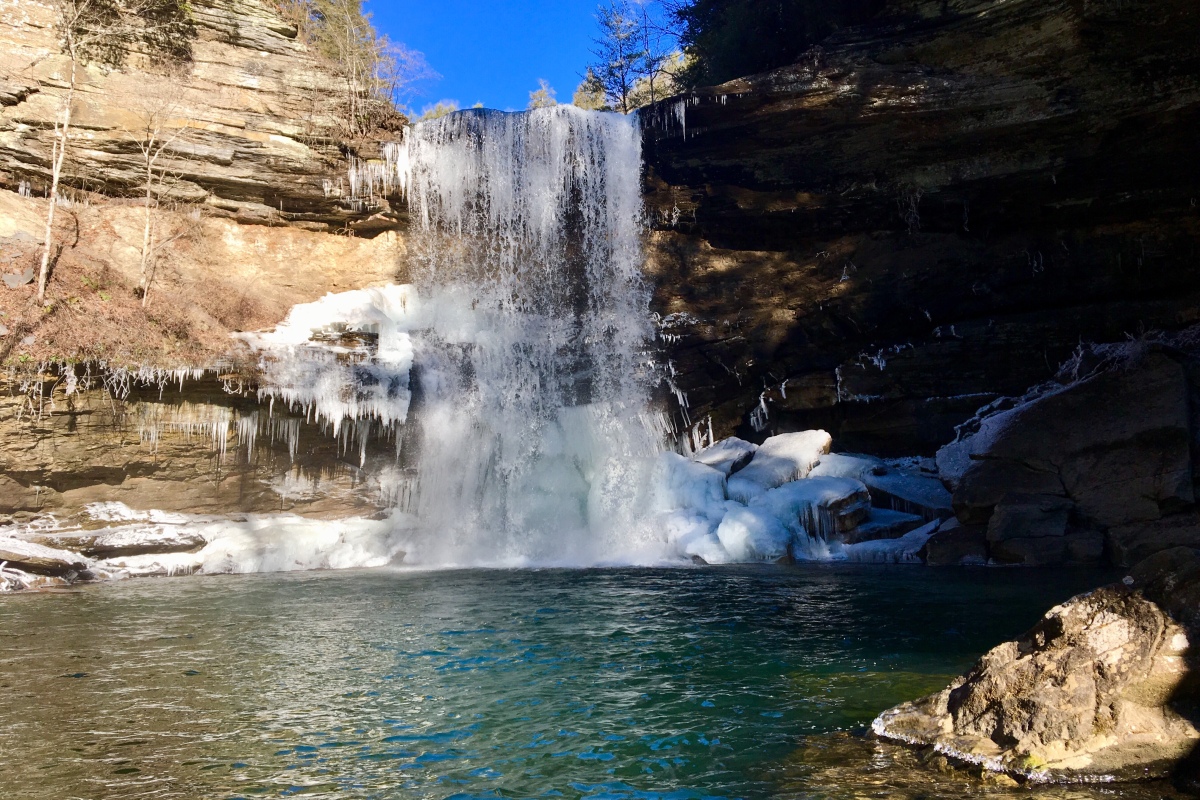 The other day I found myself on a hike different from any other I’ve ever taken; I went on a hike with just my two boys. We are a family of six with two boys and two girls, alternating boy-girl-boy-girl, so it’s just not a combination that has happened in the past.

I’m used to hiking with our entire family, the kids running ahead while my husband and I lag behind until our youngest usually ends up joining us. Or sometimes it’s just the kids and me, off on some adventure. On these hikes, my oldest daughter often hikes with me and we have civilized girl-type conversations or, often with her, just walk along in silence enjoying the day and scenery. But, hiking with just boys is…well…let’s just say different! 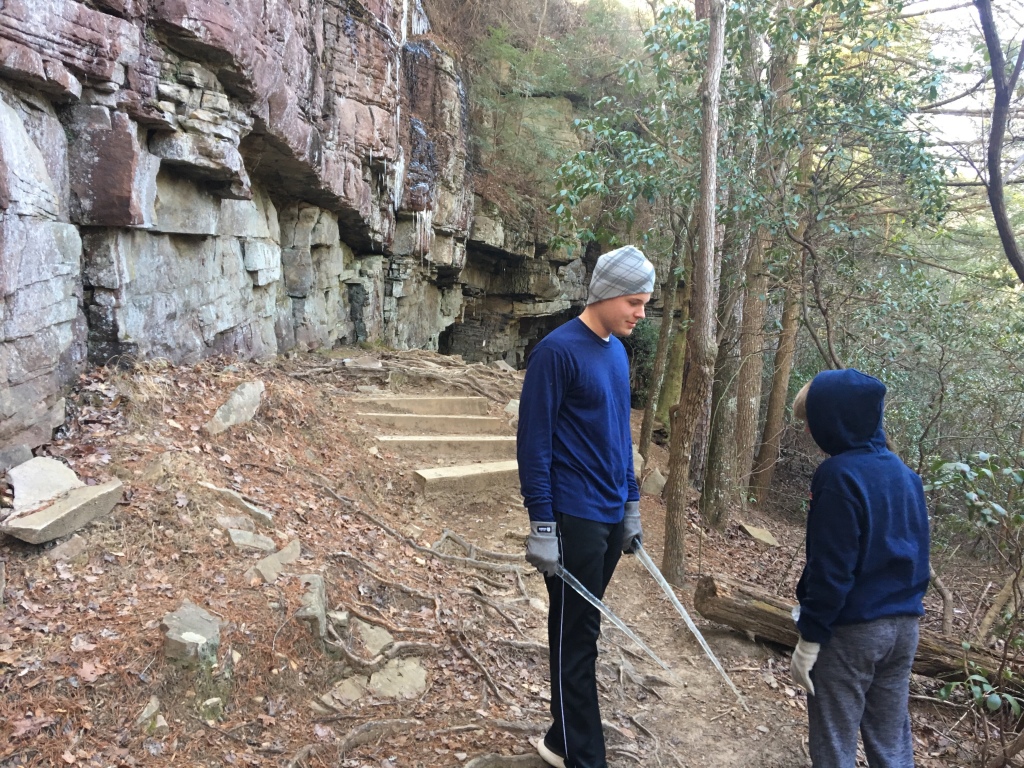 We had decided to hike a loop that included a couple waterfalls and some great overlooks. Nothing too intense, just enough to enjoy the day and get in a good hike. It was a beautiful day; cold but brilliantly sunny. The three of us hopped out of the car at the trailhead and I began to bundle up- coat, hat, glove liners, gloves, scarf, boots- all my cold weather gear. The boys threw on thin gloves and were off- no coat or boots or thick hat because “it wasn’t cold out”. It was cold out; at least to normal people! 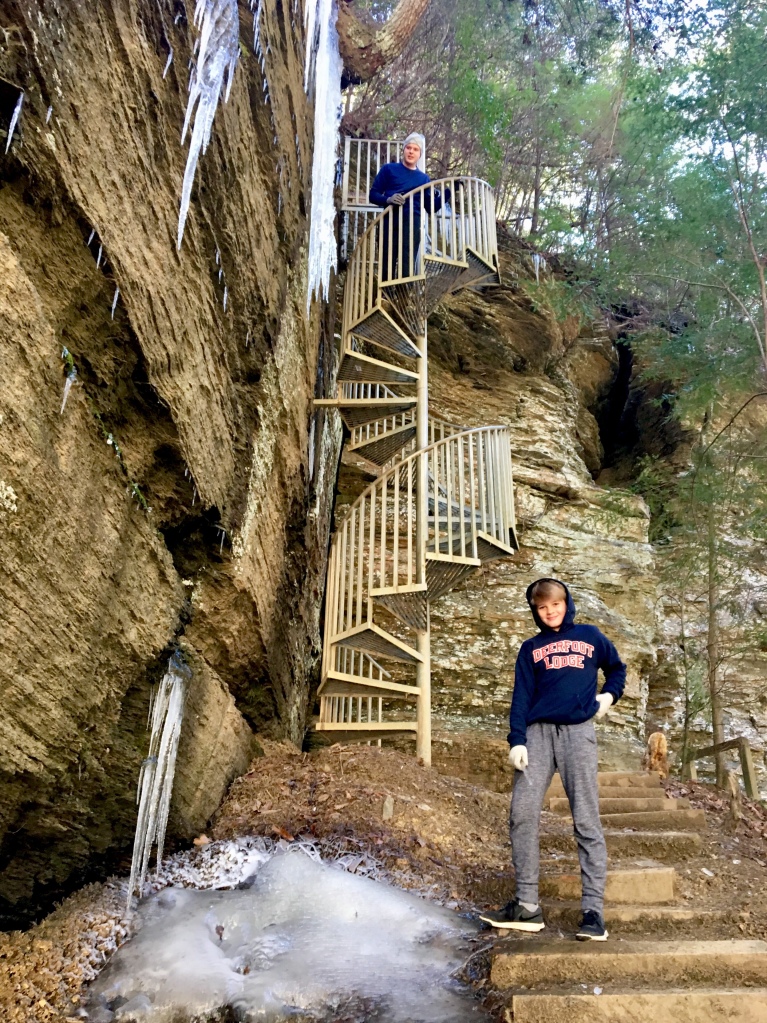 We began our hike and the boys ran ahead jumping on icy puddles had formed along the trail. Soon we were walking beside high cliffs. Here long, dripping icicles clung to the rock face. Each of my sons broke off a couple three foot long pieces of ice and began to sword fight sending shimmering flecks of ice into the air. They ran along, chasing each other and then stopping every few feet to fight. My younger son soon had nothing left but two ice nubs and ran ahead screaming and laughing as my older son chased him with his still-long ice swords. I just kept on hiking. 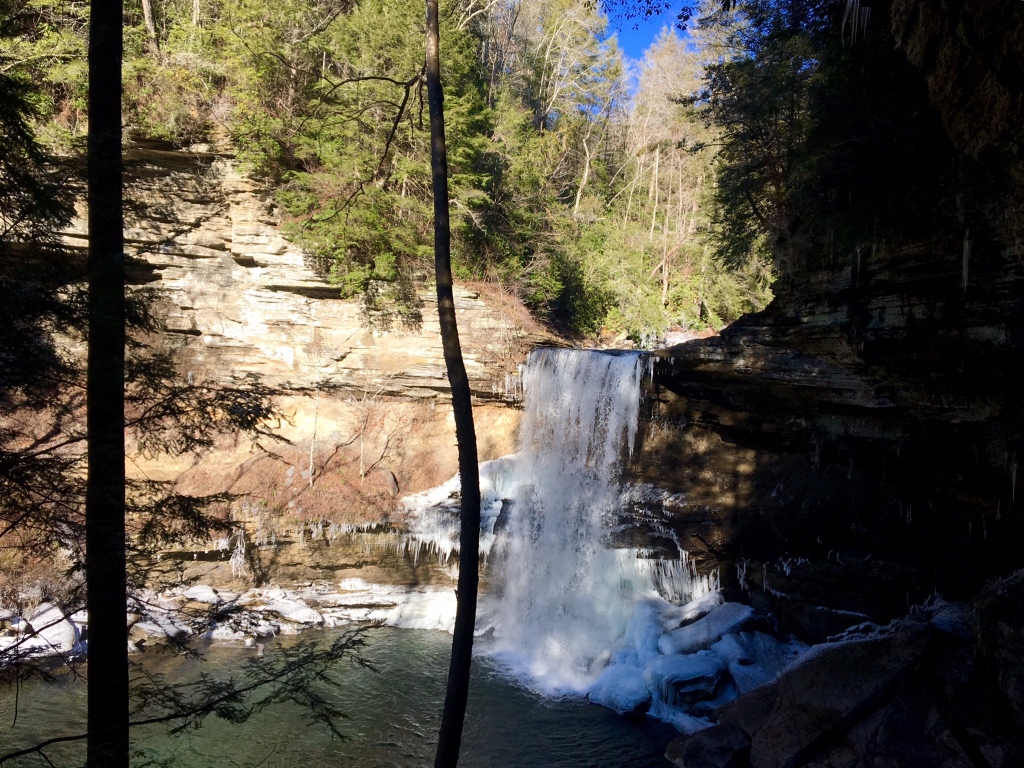 The waterfalls were beautiful, still half frozen from days on end of below freezing temperatures. Icicles hung everywhere, forming curtains hanging over the creek. My sons ran around here, rock hopping and sliding on ice and flicking cold water at each other. I sat on a rock enjoying the warmth of the sun. Suddenly, there was a loud crack and I looked up in time to see a massive chunk of icicles break off from the rim of the cliff and come crashing down to the ground shattering into a million pieces. The sun, whose warmth I had just been enjoying, had also been warming up the ice, causing it to fall in the exact spot my sons had been playing just minutes before! I decided it was time to move on.

Once past the waterfalls, we continued on the trail through the woods towards an overlook of the valley below us. The boys ran along pushing each other into mud and discussing who had more muscles. They are ages 16 and 11; occupying two different worlds right now. My oldest, passed me in height a couple years ago and is every bit a teenager, slowly becoming more and more independent. My youngest son is smack in the middle of boyhood and idolizes his older brother who refers to him as “midget”. But my 16year old gets it and as always been great with his younger brother, knowing how far to take the teasing and play fighting. Just far enough to make the roughhousing, well…rough, but never far enough for real pain or tears. It’s a brotherly art that my son has mastered. 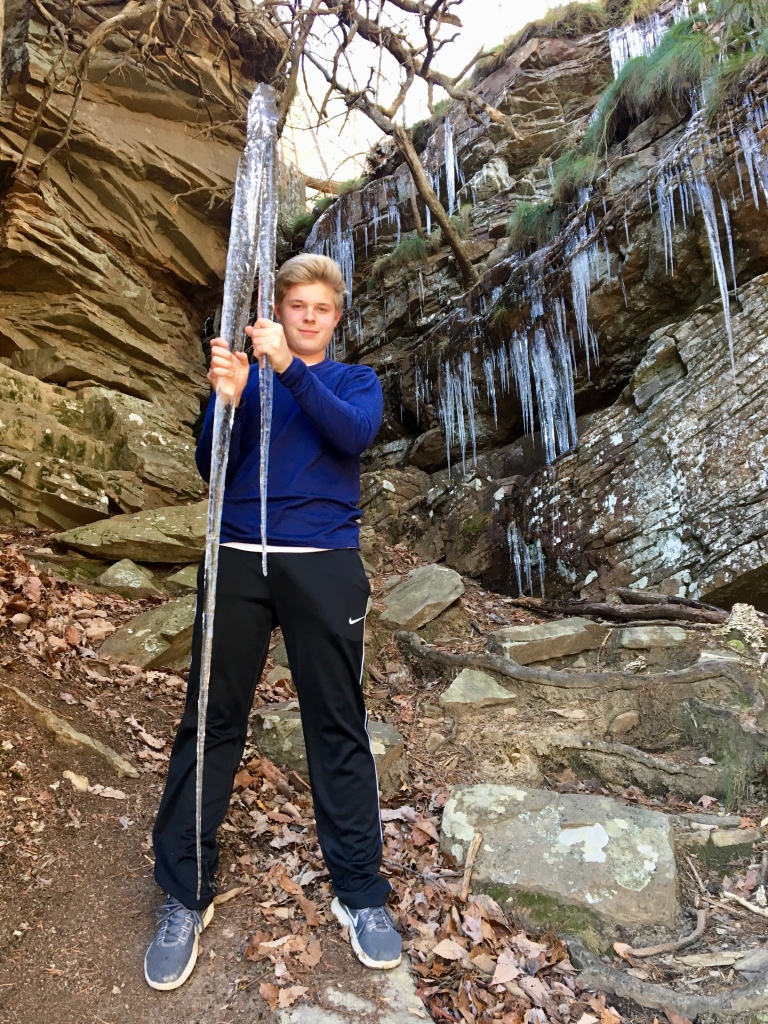 Our hike continued and the discussion ranged from video game techniques to lacrosse to favorite super hero’s to food. There were lots of contests: who could throw a rock/stick/dirt clod/leaf the furthest, who could spit and hit that rock, who could jump from one rock to another without falling, who was the fastest runner, etc, etc, etc. I just kept on walking.

Then came the bodily function talk and examples. I stopped walking and proceeded to lecture about how that is unacceptable around females. Do what you want with your friends and other boys, but not around girls. But I was told that there were no girls around, just Mom, and besides this girl and this girl and that one all do the same thing. I gave up and resumed my hiking.

After the overlook we reached more rocky cliffs full of long skinny icicles. My older son decided to knock them off with rocks, seeing how close to us he could get them to shatter. My younger son decided just to eat the ice. We then headed back because they were “starving”, repeating all the aforementioned contests and conversations, including one last final sprint to the car.

Our drive home included two extra stops for food because, you know, the starving thing. We took turns playing our favorite songs and had a prolonged conversation about YouTube videos. I arrived home exhausted, but not from the hike. The day had been nonstop: full of movement and jokes and burns and contests and dodging falling ice. It had been hard to keep up the pace. But it had also been a day I’ll always treasure; always remember.

You can learn more about our hike in the Savage Gulf area of South Cumberland State Park here.

7 thoughts on “Hiking with boys”