Tennessee is a beautiful state with amazing state parks. Parks that range from high mountain peaks to the Mississippi delta, from battle fields to Native American burial grounds, from gorgeous blue lakes to diverse river systems. There’s just so much beauty and variety. So, I’ve made it a goal of mine to visit every state park in Tennessee in 2018. Below is my story of my adventure at one park.

Early morning had brought with it freezing fog that coated all surfaces with a sheen of ice. Now, though, the sun was out and quickly warming everything. The blue skies were such a great sight after days of rain. We were excited to begin our trip, searching for bald eagles.

The largest naturally occurring lake in Tennessee is relatively new.  During 1811-1812, a series of earthquakes hit the area. They were so strong that they caused the ground to drop ten feet and the Mississippi River to flow backwards for a period of time, filling in that 15,000 acres of collapsed swampland to create Reelfoot Lake.

Despite being tucked away in the far northwest corner of Tennessee, close to nothing, Reelfoot Lake gets tens of thousands of visitors every year. They come for the water and the cypress tress, they come to fish and hunt, and they come for the the reason we were there- the bald eagles. Each January and February, Reelfoot Lake State Park offers tours that let you observe and learn more about the American bald eagle.

Our tour consisted of two buses, each with its own driver who would be our guide and spend the next two hours driving us around in search of bald eagles. Our driver introduced himself and let us know that not only was he a ranger at Reelfoot Lake State Park, but he had grown up in the area and his parents had worked at the park. You could tell he had a true love of the park and the surrounding area.

We immediately saw a bald eagle, flying back to it’s nest. The bus slowed down, but we had to keep moving here because we were on the main road. Our driver shared with us how the locals aren’t thrilled with the bald eagle tourist season because the tourists do things like stop in the middle of the road to look at a soaring eagle. We turned off of the main road, onto a road that led to a preserve. Here we were safe to go slow, pull over, and stop at will.

As we drove, two more eagles flew far overhead. We had seen 3 eagles already within just a few minutes of searching. Our driver informed us that his tour always sees the most eagles. “We’re up to 12 now right?”, he said laughing and the rest of the tour we kept our “official” eagle count and our “we saw the most”exaggerated count.

Once in the preserve we stopped and got out of the bus. Our driver set up a scope and we took turns looking through it. There was a large nest in the distance with an eagle in it. The nest was huge! Bald eagle nests are around 4-5 feet in diameter and just as deep. A mating pair will return to them same nest year after year, continual adding new materials to the nest. The female usually lays 1-3 eggs and the pair takes turns sitting on the eggs while the other searches for food or nesting material. Here we could see the eagle peeking out of the nest and a few more flying around overhead. 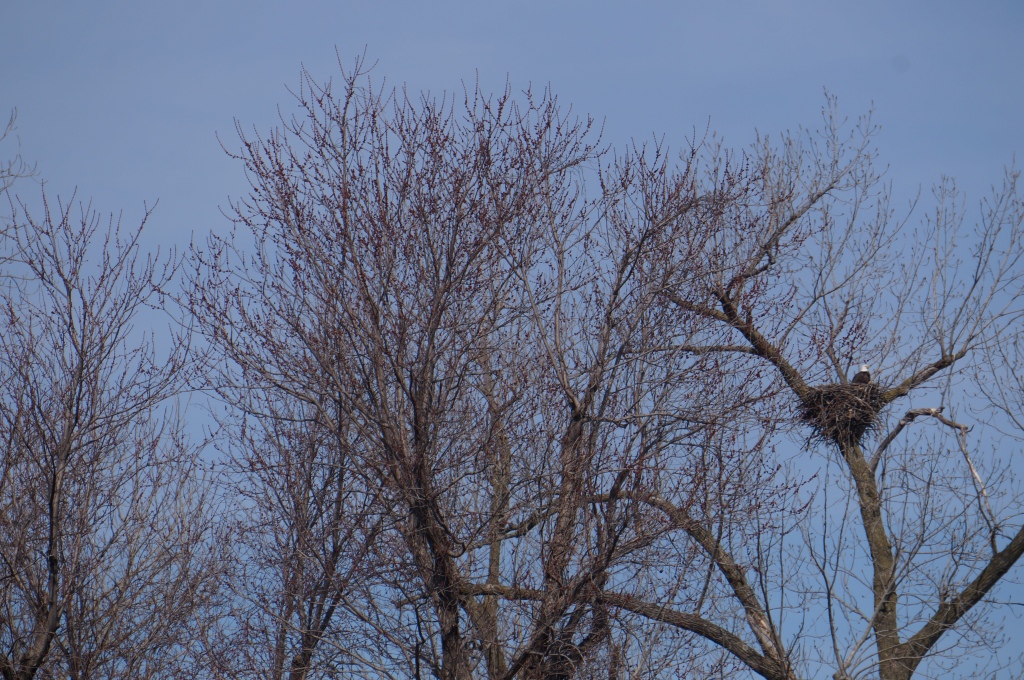 A bird flew far overheard and our driver informed us that it was a hawk or “on a slow day, a bald eagle”, he said laughing. He explained how you can tell a bald eagle in the air because their wings are flat while other bird’s wings form a V as they fly. Hawks are numerous in the area and so are snow geese, which bald eagles love to eat. At one point we saw a massive group of bright white snow geese decoys with two large humans in the middle dressed in all white jumpsuits rushing around arranging the decoys. This is how they hunt the snow geese, with literally thousands of dollars worth of decoys set up in a flock to attract the real thing. It was pretty funny to see!

Our next destination took us away from the lake to drive along the top of a levee. Here, the Mississippi River was to our right and flat, fertile farmland to our left. The park ranger explained that there were once many small communities here, all with a couple hundred residents. They are gone now, nothing left to remind us that they existed, save a couple of houses and a still-in-use church. The constant flooding of the Mississippi and hardships of maintaining a small farm had caused most to leave long ago. We got out of the buses here. A cold wind blew, hitting me in the face, as I gazed across the empty fields to where a small community once struggled to thrive. It was quiet and so empty now, nothing to hint at the fact that this was once a small town. Despite being so desolate, there was a certain beauty to those flat, winter fields colored in all shades of brown.

There were quite a few eagle’s nests here and eagles flew all around us. They too, it seems, were happy to see the sun and the slightly warmer weather. We watched the eagles for awhile through two scopes that were set up, trained on different nests. A number of people had brought binoculars with them and we all excitedly pointed out eagles and other birds too each other. Most of us had a cell phone of which we tried, pretty much in vain, to capture pictures. But how could you not at least attempt a picture of those majestic birds?

Just as we were preparing to load back on the buses, we heard a noise above us. An eagle was directly overhead, flying near her nest. Suddenly a hawk appeared, flying dangerously close to that nest. We all watched, amazed, as the eagle swooped down on the hawk and, with a cry, hit it in mid air. The hawk flew off and the eagle landed on a nearby branch and looked around, just daring the hawk to come back. “Wow”, our driver said. “She gave us quite the show. This goes in the books as one of my top 5 tours of the year!” I think he actually meant it!

Tours are offered twice a day during the months of January and February and last around two hours. You will see eagles! We ended up seeing 32 bald eagles that day. Our driver said his record for the year at that point was 144 eagles during one tour.

In addition to the bald eagles, Reelfoot Lake offers canoe and pontoon boat tours of the lake. There is a museum where you can see bald eagles (ones that can no longer fly), owls, snakes, and other animals up close. There are also several hiking trails, including a boardwalk hike through the cypress.

You can find out more about Reelfoot Lake State Park here.