Guys! Traverse City is going to host a half Ironman next year! Who’s going to sign up?

That’s the text message that started it all over a year ago. Nicole, my trainer, had just found out that Traverse City, Michigan would be hosting an Ironman 70.3 in 2019 and wanted a bunch of us who train with her to sign up. But most of us, having never completed a half Ironman before, weren’t too quick to jump on that and, as it was Traverse City’s inaugural Ironman, the race sold out very fast. Nicole was in, we were out.

Fast forward to June 2019 and we received another text from Nicole:

This time we were ready. Many of us had just completed our first Ironman 70.3 a month earlier and this time we were all in. We had two relay teams set up within 10 minutes of that first text. Then, a little while later, a third relay team became available and, again, people volunteered instantly. Nine of us, all part of our tri group Music That Moves, were heading to Traverse City to race in our first Ironman relay.

It was a quick turnaround to get ready for the race. We all raised funds for the Ironman Foundation which looks to create a “positive, tangible change in race communities through grant funding and volunteerism.” You can learn more about it here. At our race the Ironman Foundation built and gave away bikes to kids and donated money to local fire stations, among other things.

Everyone doing the race was already training for other races, so the big question became who was on a team together and who was doing each leg. Nicole made that decision and we soon had our teams. I was going to do the run leg for my team.

My team named ourselves Lane 4 because that’s the lane all 3 of us happen to swim in during swim class. The other two teams became the Tennessee All Stars and Man Down (because at the last minute one of the guys had to back out due to family obligations so the team was down to 2!). We were all set!

The race weekend came quickly and we all made our way to Traverse City; some flying, some driving. We rented a condo for all of us near TC. There were 13 people total counting racers, spouses (aka our sherpas), and two kids.

The house quickly took on the feel- and smell- of a frat house with all of us piled in and our gear spread out everywhere. The main living room was filled with 6 bikes and a bunch of recovery gear. There was always someone tinkering with a bike, filling water bottles, or using the NormaTec boots in that room. The kitchen contained, along with all of our food, about 50 bananas, gallons and gallons of water, and little spilled piles of white UCAN powder everywhere. An assortment of running shoes in the corner added a lovely smell to it all. It was crowded, it was chaos at times, but I wouldn’t have done it any other way. It was just so much fun!

Race day dawned cool and clear, with temperatures in the high 40s. We somehow managed to get all 13 of us and our stuff out of the house and crammed into three vehicles by 5:15am. Once in town, we all split up to take care of our last minute race details- use the bathroom, place items in the transition area, get marked with race numbers, use the bathroom again- then all met back up at the water.

The vibe down by the water had the typical pre-race feel of nerves and confusion and excitement. The sun finally began to rise over the water to reveal perfect conditions for the wetsuit- legal swim in the 70 degree West Grand Traverse Bay of Lake Michigan. Just the day before the lake had been choppy and filled with white caps, but race day was glass! 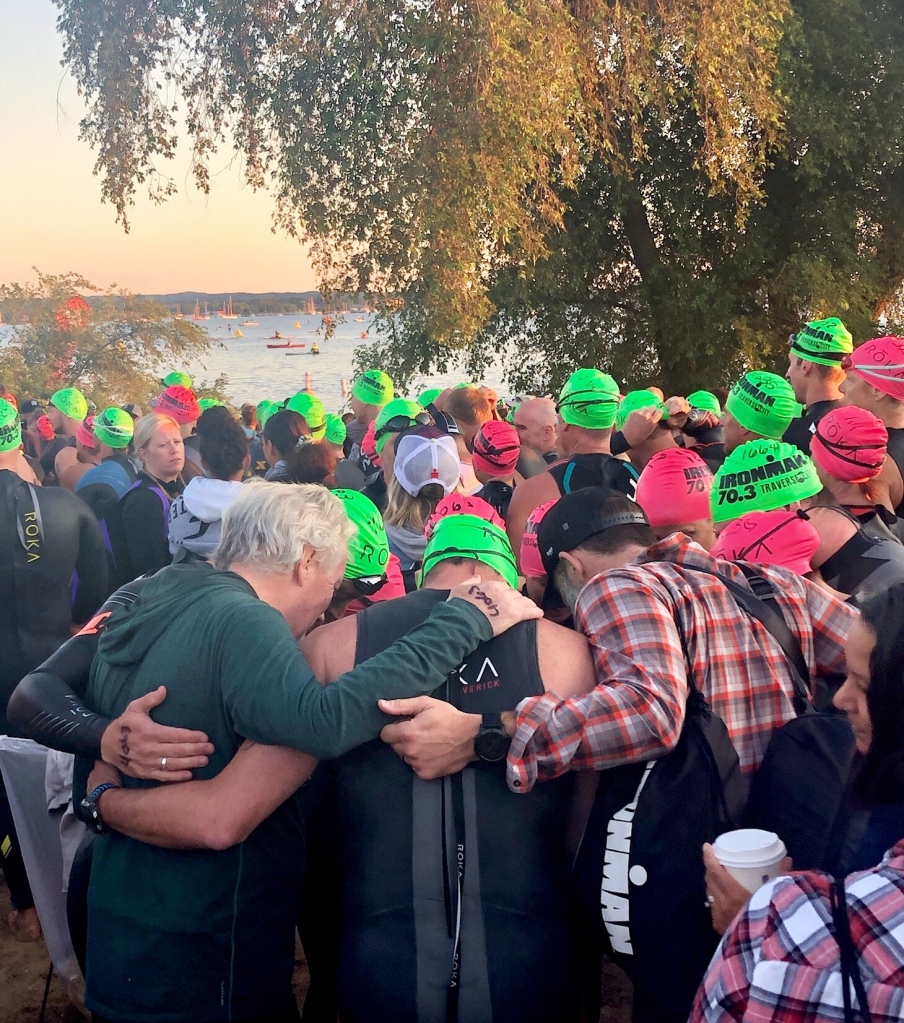 Our Music That Moves team all huddled up for a quick prayer and then hugged our swimmers goodbye as they headed down to the start. The swim for the age groupers was self seeding and they let people in about 5 at a time. The water was beautiful, especially to us from the land of green lakes. It was crystal clear, cool, and smooth. The consensus after the race from anyone that you spoke with was that the swim was amazing.

Our team members came out of the water right as expected. They all smiled and cheered as they ran up to head to transition where our people doing the bike portion of the relay were waiting. 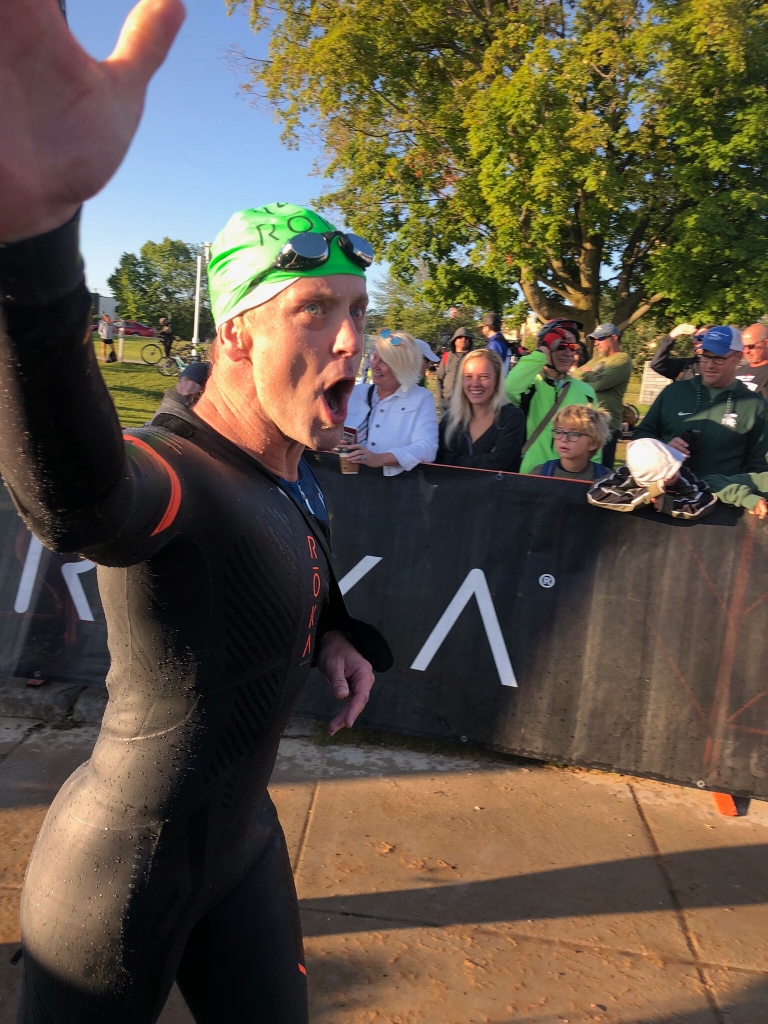 The transition to the bikers was made seamlessly and they headed out for their 56 mile ride. The first 3 miles were all uphill and then the course leveled off and turned into a series fairly steep climbs with fast downhills. There were a number of sharp turns and then the course finished with a blistering fast downhill back into town and into transition. The bikers all arrived tired, having gone all out in the course.

While we waited for our team members out on the bike course, those of us not biking went to our tent set up along the finish line to watch the pros head out on the run. It was neat to be able to see them since I usually don’t have the opportunity because I’m out on the bike course at that point. My friend’s twin daughters stood on the sidelines with their hands out as the pros ran by, hoping to get high-5’s. Some were way too focused to give them a high-5, but others smiled when they saw the girls and came over to slap their hands as they ran by. One guy actually let up his run just for a moment so he could get behind another runner in order to give the girls a high-5. They were so happy. It’s those moments that make the Ironman so special!

I was having so much fun watching and cheering for the runners that I almost forgot that I still had to participate in the relay! But soon we saw the notifications that all of our bikers were entering the last few miles of the course. They were all within ten minutes of each other which was really exciting. So, we made our way back to transition to get ready to run.

The run was great! It was two loops of an out and back mainly hugging a lake and was fairly flat. The course, at one point, went through a park filled with spectators cheering us on. We looped past our Music That Moves tent 4 times which was a lot of fun to see everyone. I think I had a smile on my face the entire run because, just a month ago, I wasn’t even sure if I’d be able to run at all, and here I was running 13 miles with no issues!

All three of our relay teams crossed the finish line within 10 minutes of each other. The other 2 members of the team were waiting when each of us runners crossed so we could all get our finisher medals together. It was so much fun to all meet the the finish line and celebrate together! 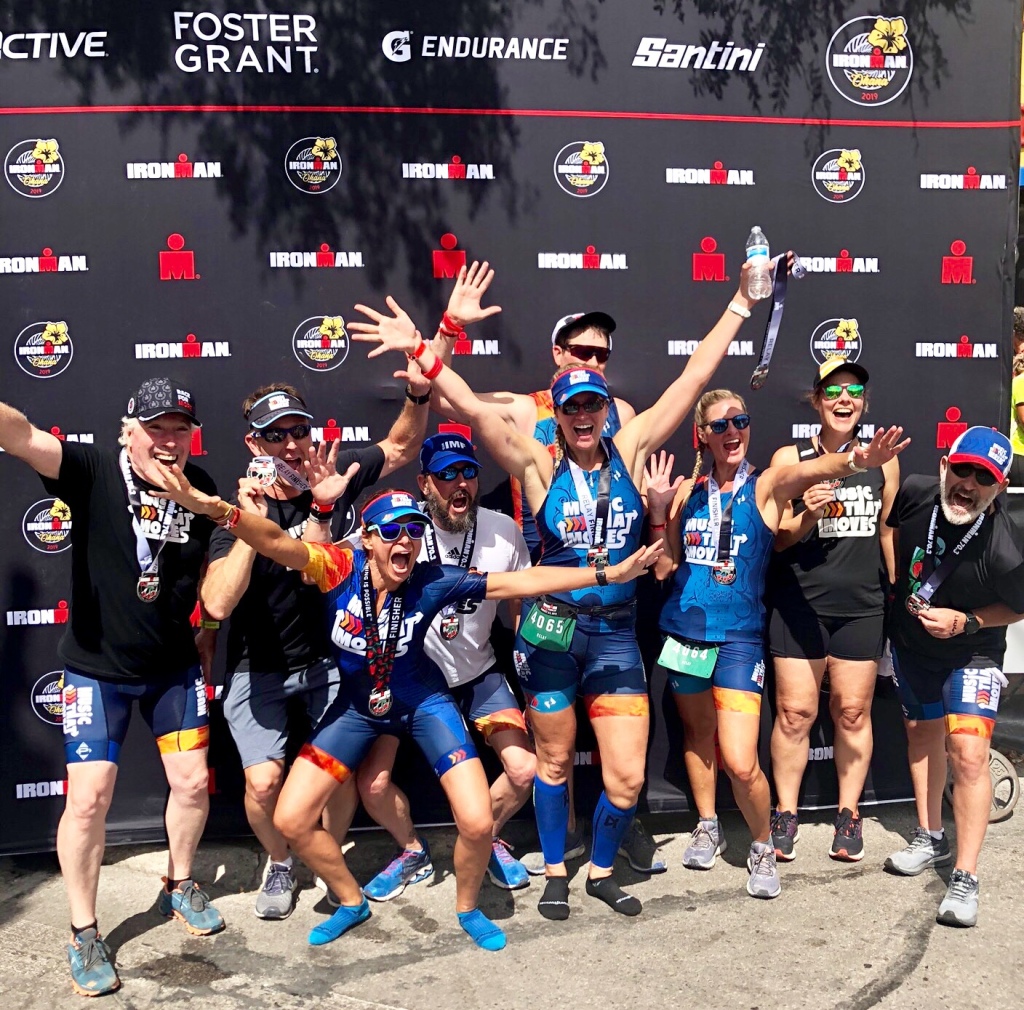 As much fun as the finish line was, the best part of the day came a couple hours later. Ironman’s tagline is “Anything is Possible” because what makes Ironman so special is the people who aren’t pros. Just average people with jobs and families and a little extra weight around the middle who work harder than they’ve ever worked in their life to accomplish the goal of completing an Ironman.

And then there are those that are anything but average. Those that go above and beyond what seems possible to accomplish the goal of completing an Ironman. This is the Agars!

Jeff and Johnny Agar are part of our Music that Moves team. Johnny has Cerebral Palsy, but that hasn’t stopped him from becoming an Ironman. Jeff, his dad, competes in every Ironman with Johnny; swimming and biking and running with Johnny right there with him. Neither of them makes excuses, they just do it. Move forward stroke by stroke and step by step until they reach the finish line.

Johnny has begun to finish each Ironman by walking across the finish line. To officially complete a 70.3 Ironman you need to finish in 8:30 hours. With 10 minutes to spare the Agars reached the last tenth of a mile at Traverse City. They quickly got Johnny up and into his walker and, with every spectator cheering like crazy, Johnny crossed the finish line to complete the race! There was truly not a dry eye to be found.

This is what it’s all about! People like Johnny are the real hero’s and winners of Ironman. As is anyone who has completed an Ironman. It’s taken months of sacrifice and exhaustion and pushing aside doubt and excuses to go further than you ever thought was possible. And the thing is, anyone can do it! You can too! 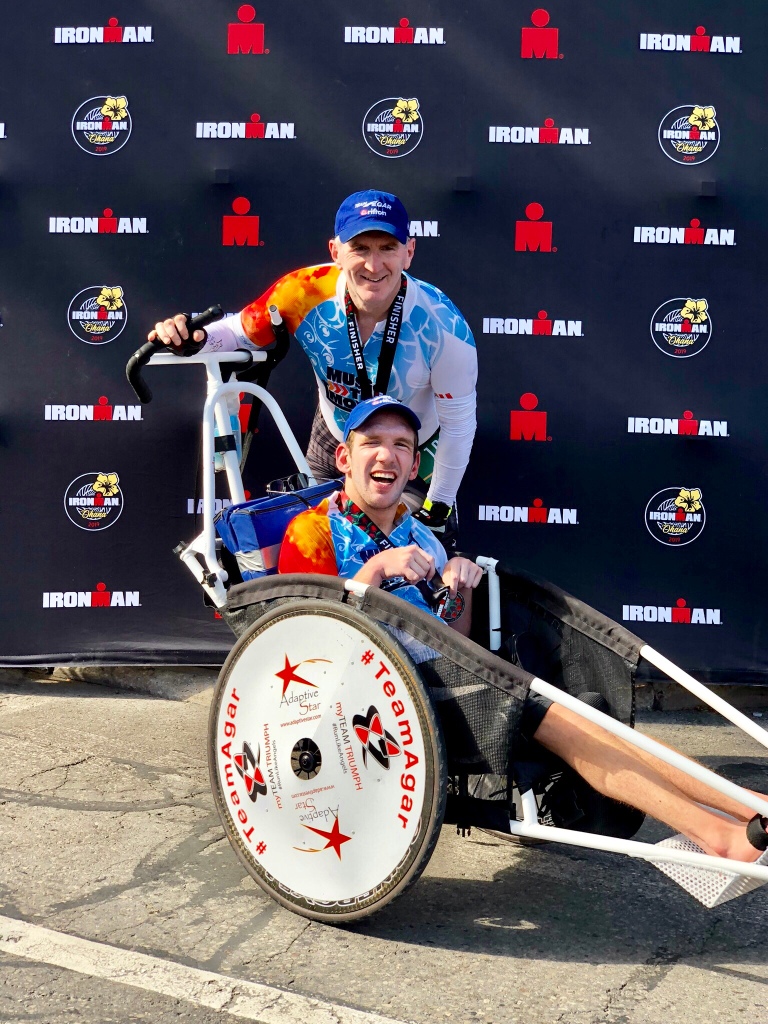 You can learn more about the Agar’s here!