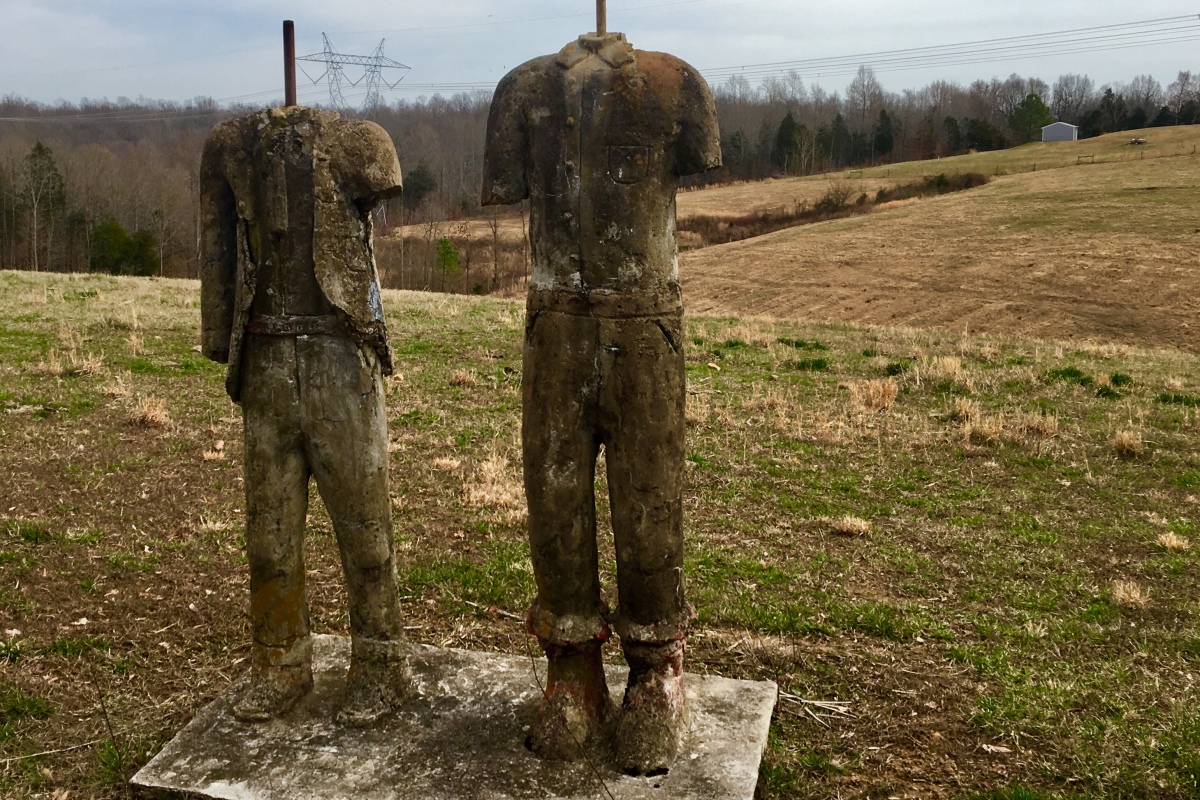 Having turned off the highway a while ago, we had been flying through empty fields ever since. Fields that in a few months would be bursting with color and activity, today were empty and void of life. The world around us was monochrome, all grays and browns. The air was the same- seasonless. Neither hot nor cold, breathing it in felt like taking a breath of gray. It was one of those days that gave the feeling of being suspended in time.

The road wound it’s way through the farmland; twisting and turning around crumbing stone walls and barbed wire fences. We passed very few cars and saw even fewer people. But we had cows and horses and one smelly chicken farm to keep us company as we made our way to the statues. 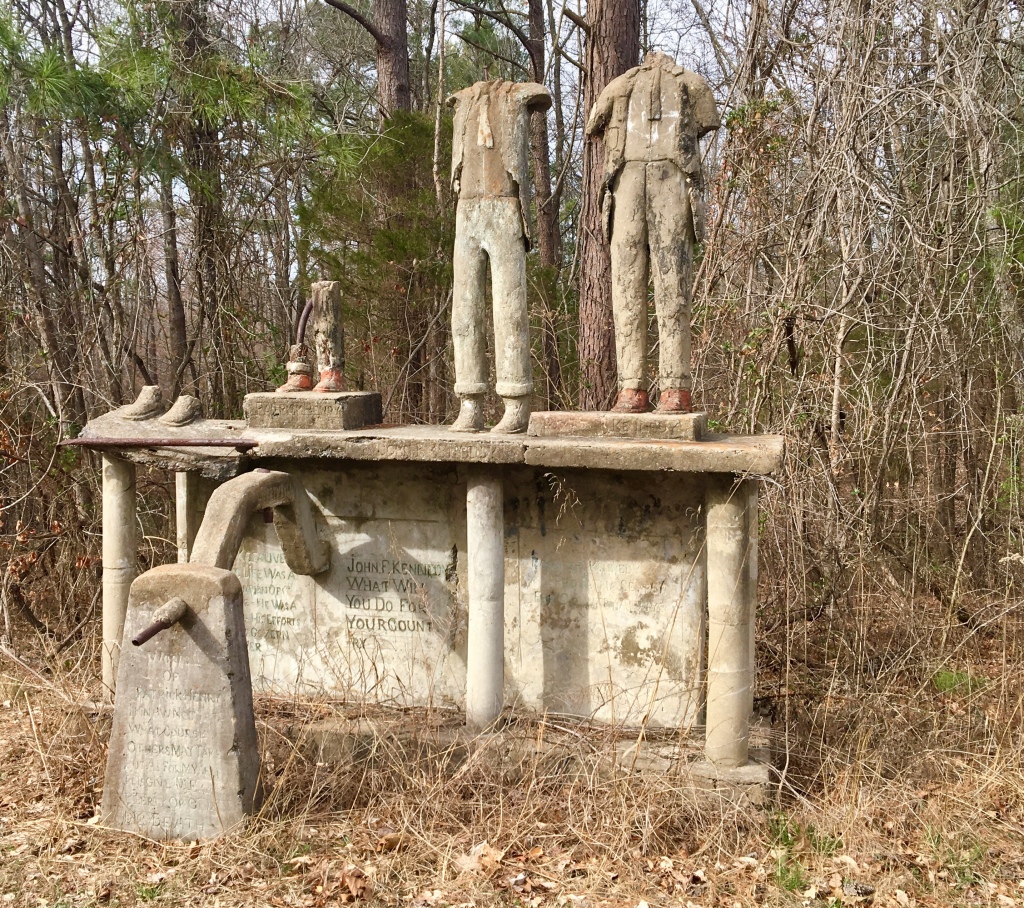 The statues were the reason we were driving on this country road. Somewhere, hidden deep in these rolling hills were the E.T. Wickham statues of Palmyra, Tennessee. 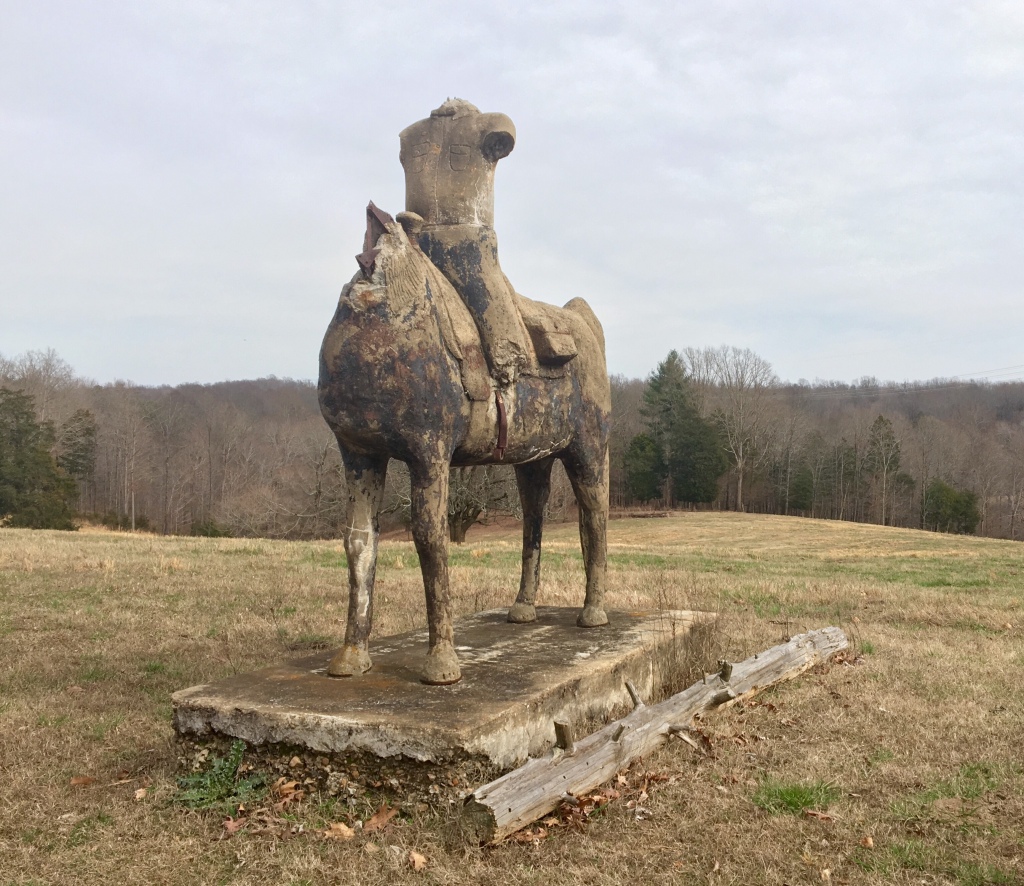 Enoch Tanner Wickham was a tobacco farmer who was born in 1883. In the 1950’s, at the age of 67, he decided to try sculpture, building his first statue of the Virgin Mary crushing a snake out of cement, chicken wire, and rebar. From there he continued to create statues. These statues were life sized and placed on huge bases along the road. He sculpted everything from historical figures like Tecumseh (an Indian chief) and Sitting Bull to Andrew Jackson and Daniel Boone, and even Bobby and Jack Kennedy. He also created a monument to the son he lost in World War II and a statue of himself riding a giant bull.

E.T. Wickham, who was self taught, was very proud of his creations and enjoyed showing them to visitors. He did not stop sculpting until his death in 1970. By the end, he had created over 30 statues which were set up along two roads in Palmyra. Unfortunately, with no one left to watch over the massive statues when he was gone, they slowly deteriorated with time and weather and especially vandalism. 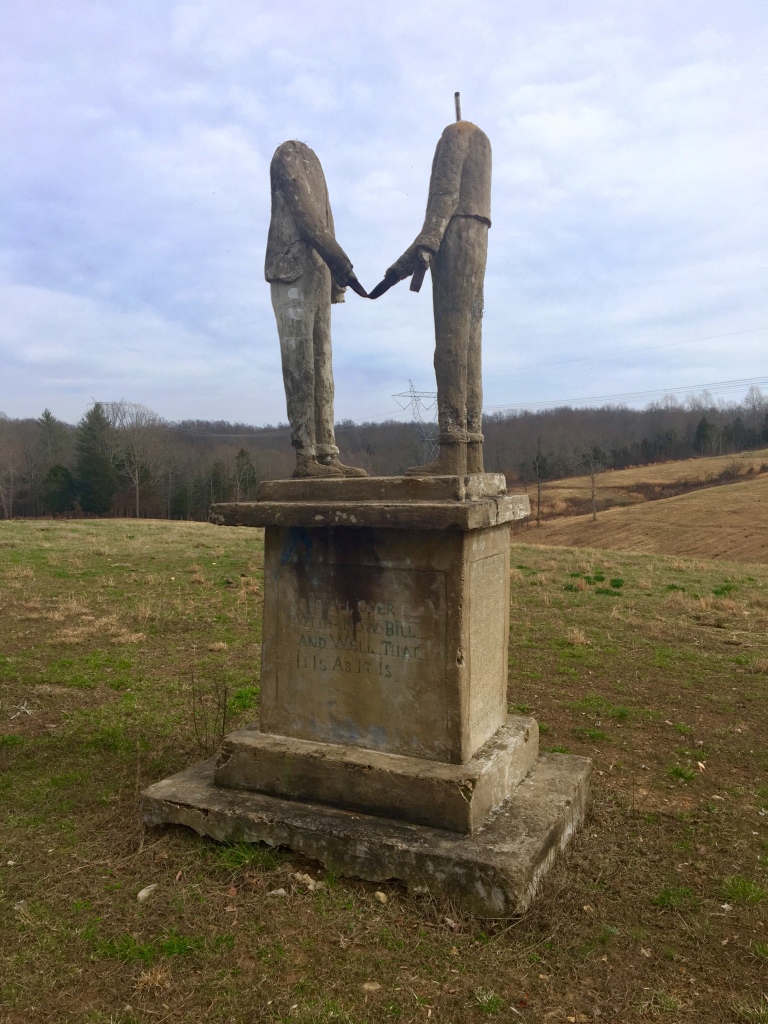 We drove around a bend and there they were, E.T. Wickham’s statues standing on a ridge, looking out at empty rolling hills. We parked the car and got out to take a closer look. It was a lonely place and the gray of the day seemed to engulf us and fill the silence around us. The statues, once proud and colorful I’m sure, looked macabre. 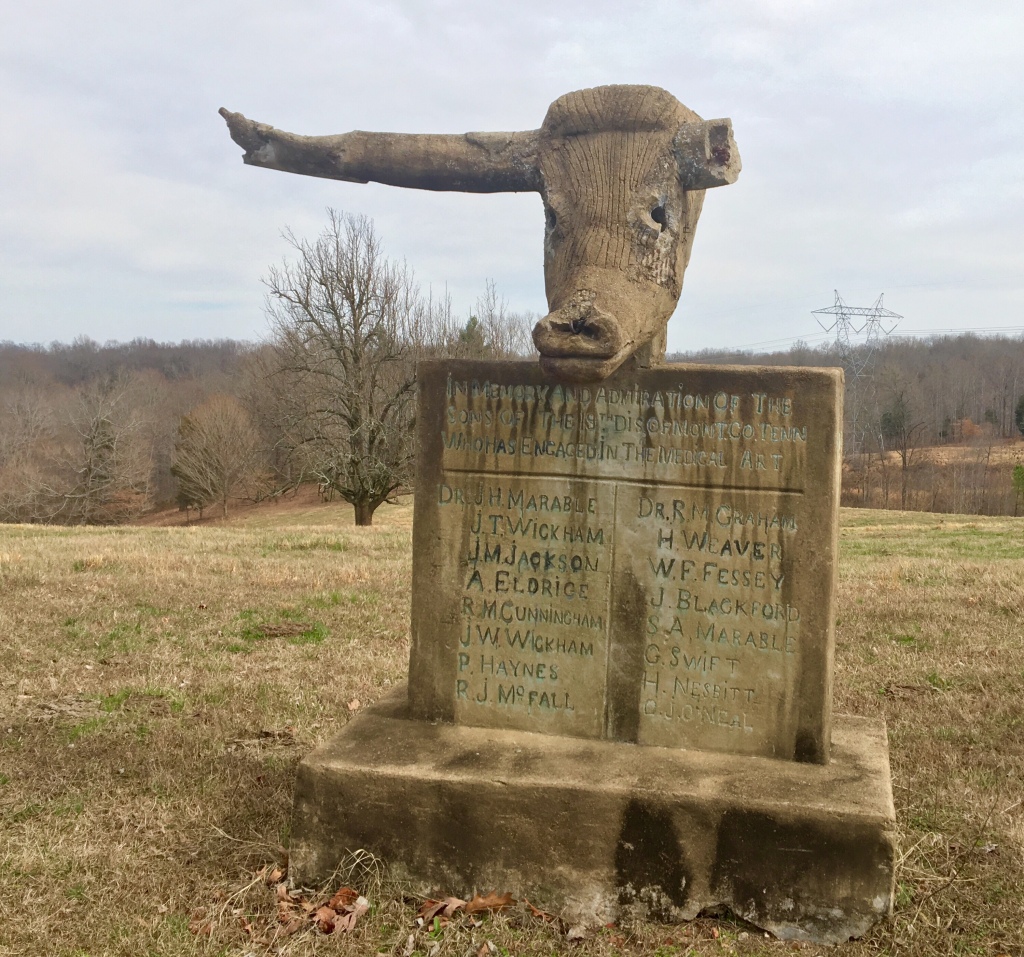 The cement statues, all headless and many missing limbs, were slowly decaying back into the earth. Water stained and covered with moss, they had the look of something ancient. Something timeless. You got the eerie sense that E.T. Wickham’s statues had always been. They guarded the fields and hills and cows high up on this ridge. Despite being headless, they watched and knew and protected. 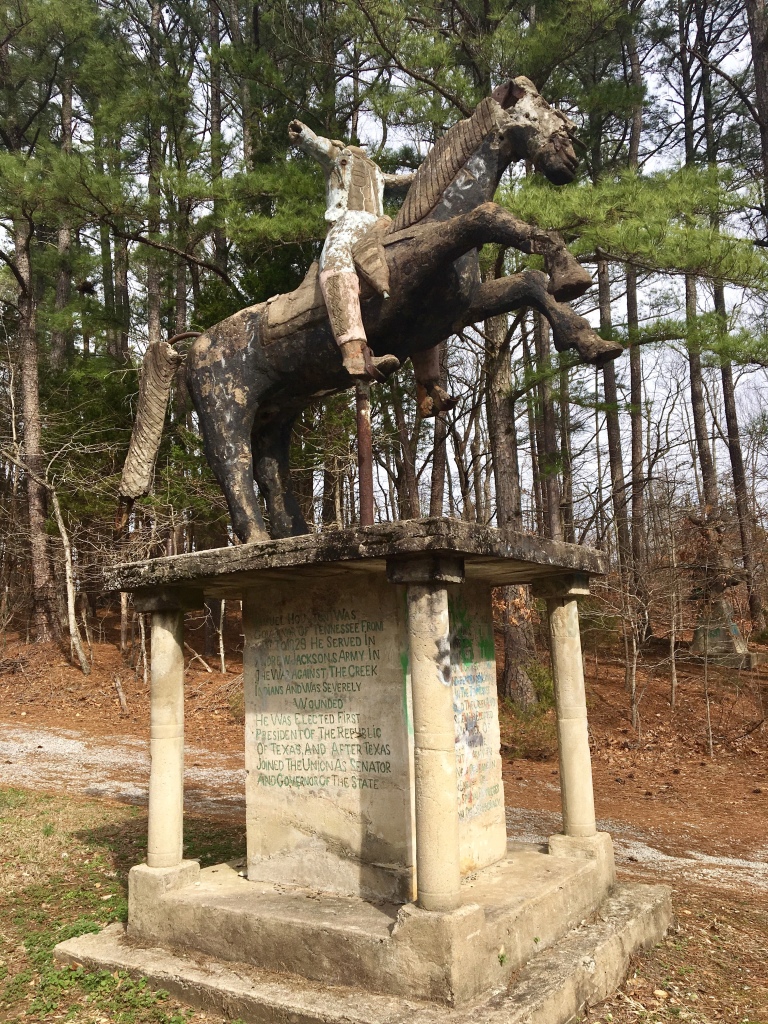 We got back in the car and drove down the road to the next set of Wickham’s stone statues. They were in the same state as the first group, slowly falling apart and crumbling. Weather is one thing, but it was sad to see how much they have been vandalized . Let’s hope that has stopped! They are such great examples of folk art. A beautifully lonely legacy of a man who took to sculpting late in life. A legacy of rural life and of hero’s both local and national. A reminder of a simpler, less cynical time. There’s not a lot left like this. 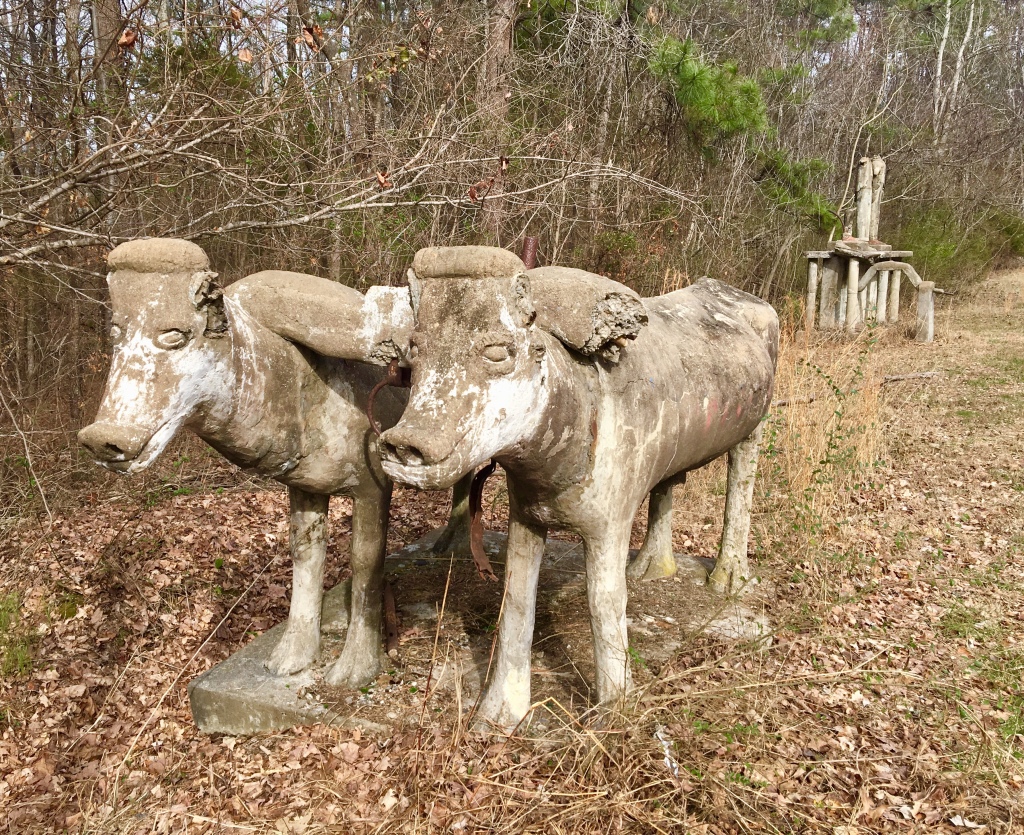 We drove home, back through the twisting roads and empty fields and staring cows. The sun set, the day slipping from gray to black almost unnoticed as we returned to “civilization”. I pictured the decaying statues out there in the dark, guarding the rural countryside, and smiled, happy to have had the chance to visit them. 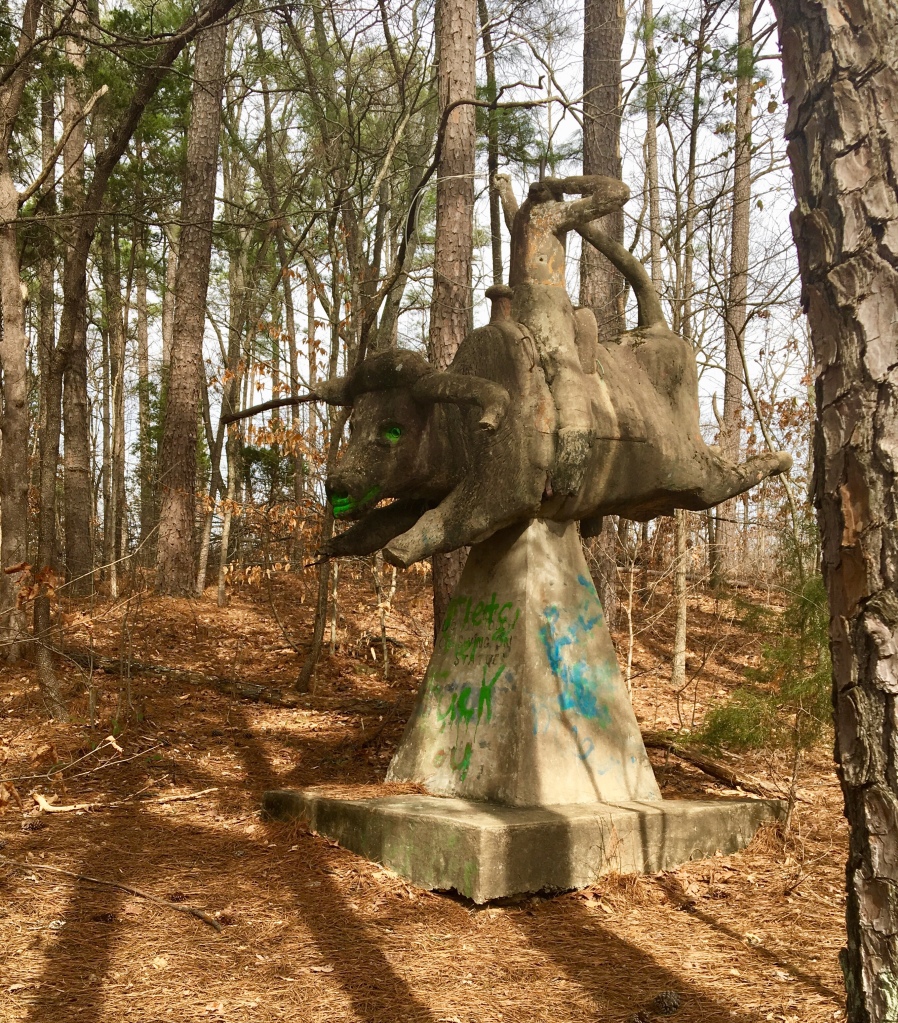 You can learn more about E.T. Wickham and his statues and see pictures of them in their original state here. 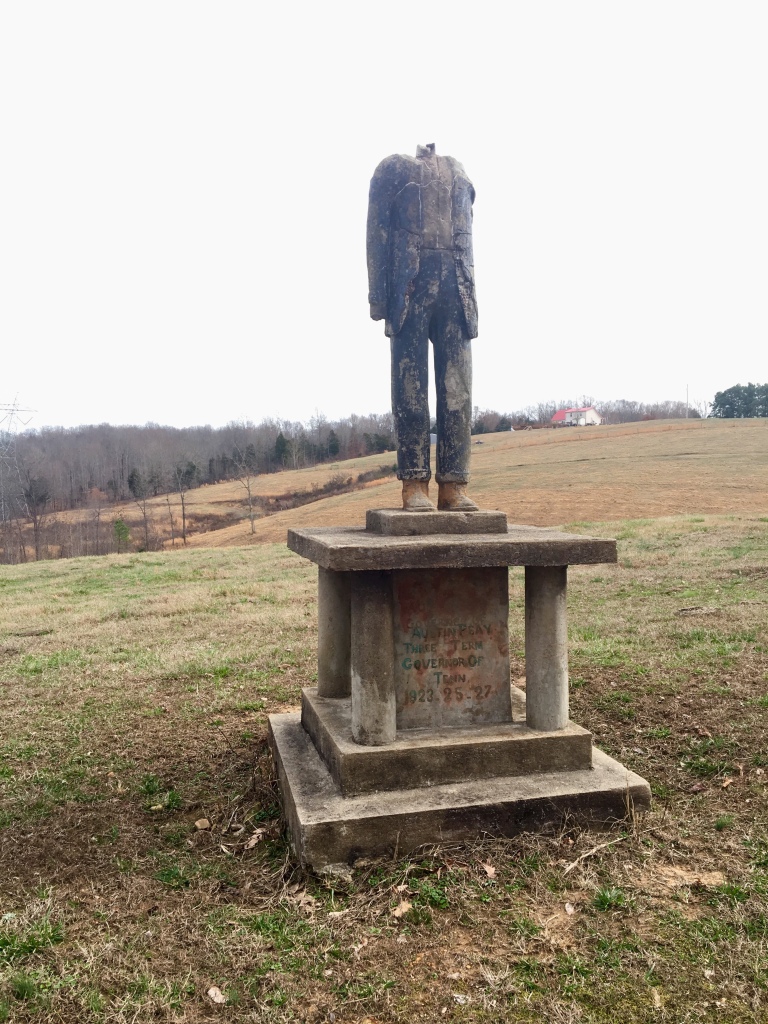 The statues of Wickham Stone Park are located on Buck Smith Hill Road and Oak Ridge Road, in Palmyra, Tn, about an hour northwest of Nashville.