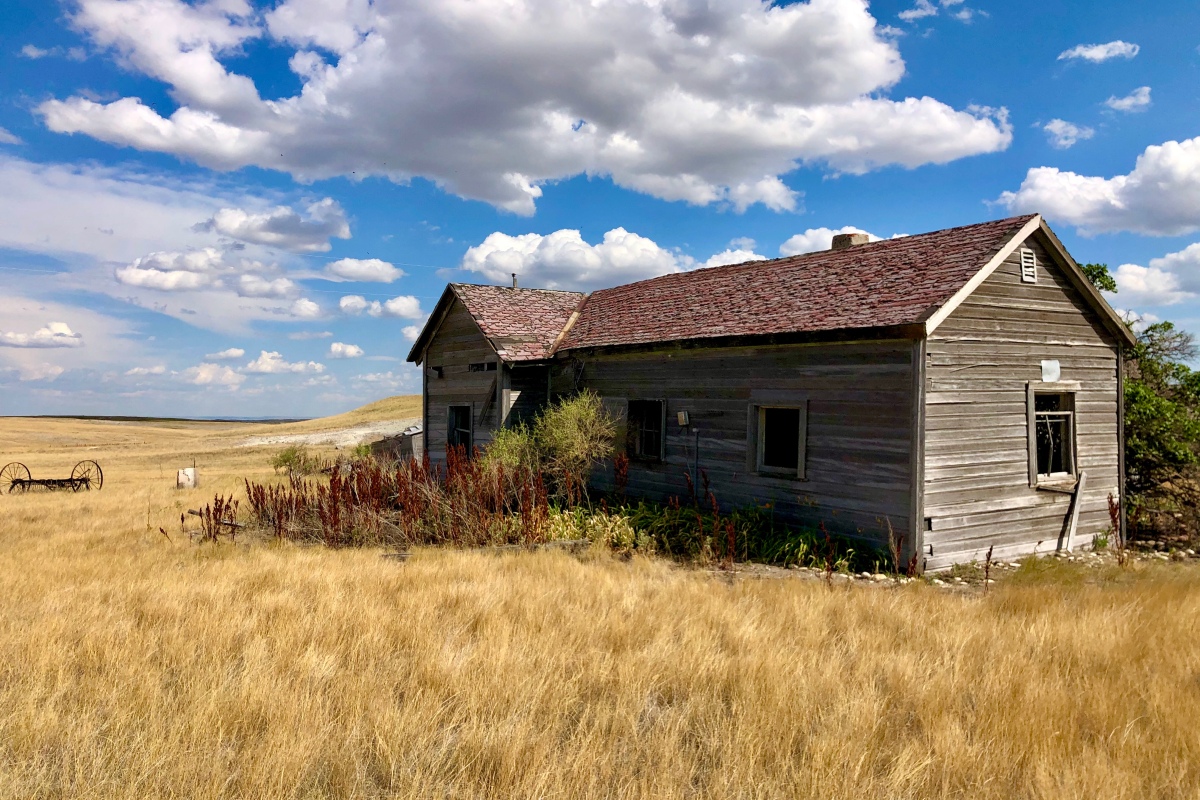 The first thing I noticed was the vast emptiness. I looked around and realized just how alone I was. Rolling hills of grass reached out as far as the eye could see to touch the sky. And it was so quiet. There was no sound except for the wind; hot and dry and incessant. It all gave me an odd feeling of claustrophobia to be in a space with so much nothingness. Grass and sky and nothing more, save for the deserted house next to me. How had someone ever lived here?

We had headed south out of South Dakota, driving in a land so foreign looking to us easterners. A dry landscape of brown and muted greens had replaced the bright greens and humidity of the east coast.

Soon we passed through Ardmore, a modern day ghost town on the South Dakota-Nebraska border. Abandoned homes and cars still stand; its residents finally abandoning the town in the 1980’s due to lack of fresh drinking water. Ardmore was a town founded by the railroads and became a thriving community as its people managed to make a living on the desolate plains. But when the trains that had once brought clean drinking water to the town no longer stopped, the town could not survive. It literally dried up and it’s residents abandoned the town leaving what remained to slowly be reclaimed by the grasslands.

Once in Nebraska we turned off of the tarmac and onto a crushed gravel road. We drove past a couple farms and soon were alone, nothing but miles of grasslands around us as we drove deeper into the landscape, our car kicking up a plume of dry dust so that we could no longer see where we had come from. Our road followed a railroad track which was still in use. We passed no other cars and saw no one as we drove on. After miles of driving through the rolling plains we saw something ahead on our right. An abandoned farmstead. We decided to get out and explore.

The house was set just a little ways off of the gravel road, surrounded by the grassland on all sides. This grass that had looked so soft blowing in the wind from the car window was anything but. The grass was dry and sharp and crushed beneath my feet as I walked along toward the house under the hot sun. I also realized that there were cactus’ mixed in as my heel brushed against one giving me a good scrape. Such a harsh landscape to build a house.

The house was a bit rambling with three separate buildings butting up to each other at 90 degree angles. We speculated that maybe the owners added on to the house as needed. A few outbuildings and farm equipment lay scattered about the property as well. The hot dry wind blew as we explored, rattling a piece of lose roofing.

We walked inside one of the sections of the house and the first thing I noticed was a lack of the mildew smell that’s so prevalent in the abandoned buildings at home where anything left on its own long enough will rot and decay back into the land. Here buildings seemed to reach a sort of dusty mummification, standing proudly as if to prove that someone had once survived in this harsh climate. The second thing I noticed was that this had not started out as a house.

The long, narrow room had walls that rounded up into the ceiling, a seemingly odd choice for such a rustic structure. We looked up and saw an area where the ceiling had come down. Instead of finding roof rafters above the ceiling dry wall, there was the ceiling of a beautiful old train car. It hit us then, the house was made out of old train cars!

There were three train cars to be exact. The owner had moved train cars from the nearby tracks and created a house, drywalling over the inside cars and covering the outside with wood siding and a traditional roof. The cars were placed together to create a home. All throughout the house in places where the dry wall had fallen down you could see the train cars still in really good condition. Such ingenuity!

We wandered around to some of the outbuildings and saw that these too were old train cars. It was easy to spot once we realized what they were. As we explored, we speculated on why the home was built this way. Was it because this was the best option financially for the owner? Or were the railroad cars a temporary solution to a house that just became permanent? Maybe it was just a fulfillment of the dream every child who has read The Boxcar Children has had; to live in a train car? We could only guess. Whatever the reason, it had been someone’s home. A life or lives were lived here, hard work was done, dreams were fulfilled or crushed. And then, in the not so distant past, the home was abandoned and left to the elements.

As we began to leave, I stood alone taking one more look around. The loneliness of this home and this place filled me. Such quiet and isolation. It must have been so difficult to scratch out a life here. Nature appeared to have won, yet I was glad the house remained, standing proud amongst the grasses and the never ending wind. A train whistle blew in the distance and I turned toward our car, ready to be back with my family and keep moving forward down the road.