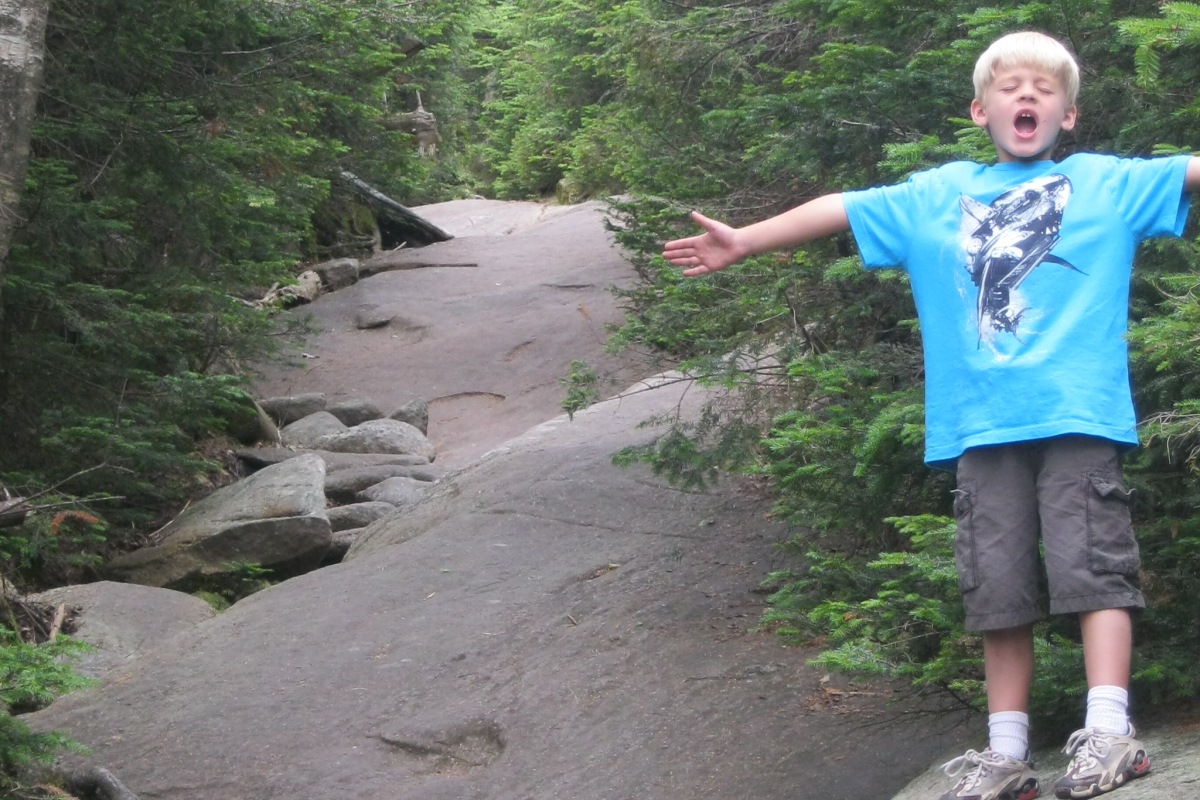 What!  We have not hiked the Adirondacks most popular hike!  How can that be?

We were taking my oldest son to summer camp in the Adirondacks and decided to stay for a long weekend after we dropped him off.  If you have read other posts of mine such as conquering the mountain, you know that the Adirondacks are my favorite place visit.  It’s beautiful, rugged, rural, and there is so much to do!  I began to plan what we would do this time and I came across Blue Mountain in the town of Blue Mountain Lake.  We have been to the town a number of times but have never hiked the 2 mile trail to the top of the mountain which many websites stated was the most popular hike in the Adirondacks.  Guess it was about time that we hike it!

Blue Mountain Lake (locals call it “Blue”) is a beautiful little town nestled in the middle of the Adirondack Park.  It’s lake, you guessed it, Blue Mountain Lake, is at the center of the town.  It’s cool, clear waters are dotted with islands and make for a great place to explore by boat.  The town is also home to the Adirondack Museum which I highly recommend spending a day exploring.  Just north of the museum, on Rt. 30 is the trailhead to Blue Mountain.

We arrived at the trail head around lunch so we quickly ate near the car, grabbed our gear and put it in our Kelty child carrier backpack, and we were off.  A stop at the trailhead kiosk had us laughing.  As we signed in we noticed two entries on the previous page.  The first group had written in the Destination section that they were going to hike “about halfway, until kids get tired and cranky”.  The next group had written “All the way!! With cranky kids”.  My husband and I smiled because the second group is definitely us, we complete what we start, cranky kids or not!  This fact would soon be tested…

The three kids (we were down one due to summer camp) bounded ahead on the trail, laughing and racing each other.  The first mile is really pretty flat and easy, but very worn.  You could tell this is a popular hike, the trail is worn down to the roots and rocks.  I guess it can be quite wet judging on how many boardwalks there are on the trail, but we encountered no water or mud on this hot July day.  There are also 5 geocaches along the way which kept the kids entertained and allowed for frequent stops.  Then, about halfway up, the trail turned steep.

Upward we hiked on a trail that was now just the solid rock slab of the mountain, until my normally happy talkative four year old, Anya,  just stopped, sat down, and started crying that she could go no further.  She was “too tired”.  I had really been hoping that she could complete this hike by herself but I was wearing the child carrier and was ready to put her in it.  My husband, Jeff, said “just wait and let me talk to her”.  We all sat for a good 5 minutes in order to catch our breath and so Jeff could give her a pep talk.  He told her that everyone gets tired but they keep hiking.  He also told her that if she did the entire hike by herself then she could tell her older brother, Aidan, that she did it.  That worked!  She now had a goal, to tell Aidan she had hiked the mountain on her own!  She got up, still not too happy, but ready to move onward and upward.

As we reached the summit the trail leveled off as trees became short and stubby.  We all just kept encouraging Anya and soon she realized that she had almost made it and began to become excited.  I explained that it was now just a “walk around our court” where we live; a distance they understand and know that they can complete.  Suddenly the top appeared, we had made it!

Everyone immediately clamored up to the top of the fire tower that was perched on the rocky summit.  The views were great; 360 degrees of mountains and lakes!  There was a nice breeze at the top of the tower that cooled us off quickly.  We spent some time checking out the fire tower, old cabin, and benchmarks.  There were  dragonflies everywhere which meant no mosquitoes, gnats, or flies.  It was a great place for a quick nap!  I went up the fire tower again and could hear Anya talking to some people with a dog.  She was telling them about her two cats and how she had climbed the mountain and the Eiffel Tower (that’s the fire tower to the rest of us!).  The old Anya was back!

All too soon it was time to head down.  We made our way down, Anya talking nonstop the entire way.  Going down was quick and easy!  At the trailhead, we signed ourselves out and told Anya how proud we were of her.  She beamed and was so excited to tell her big brother!

We could have chosen the easy way up there on the mountain and put her in the pack for the remainder of the hike, but the difficult way is usually so much more rewarding.  I think we parents often do not have high enough expectations of our children.  They can do so much if we push them and encourage them to try!  Pushing yourself past fear and pain to achieve something difficult is a life skill that is often not taught nowadays.  When I saw how excited and proud Anya  was to have completed the entire hike on her own, I knew we had made the right choice!

Can you think of a time that you have pushed yourself or your children and been proud of the results?

2 thoughts on “all the way! (with cranky kids)”