I think I am addicted to triathlon!  I just completed two triathlons over the past two weekends and I’m ready for more!  And I want to recruit any and everyone to do them with me.  You too!

Last weekend we had to bring my son up to camp in the Adirondacks and, while I was looking for a place to stay, I stumbled across the Piseco Lake Triathlon.   It was nearby and I thought, why not, and signed up 4 days before the race.  I’m so glad I did because it was a fun laid back race!   The morning was gorgeous, cool and sunny with fog in the valleys.  We all started together in the lake; there were no heats.  It was a quick start, a couple of announcements and suddenly it was time to swim.  I was swimming before I knew it.  The lake was a bit disappointing though, because I expected the crystal clear waters of many Adirondack lakes.  This one however was the typical green of most lakes.  At least I’m used to that by now.

I raced out of the lake, put on flip-flops ( something I’m just sure is in every professional triathlete’s bag) because we had to run up a long rocky hill to reach T1.  My bike was leaning against the fence of a baseball field and, since there was no official transition area, my husband ran up with me.  I had my own personal crew!  I was tempted to ask him to squirt water into my mouth a buckle my helmet, but I did it myself and was off to ride around the lake.  The ride was fun, not many hills at all, and since we had all started out together, we all rode together too.  It was great to be around others and encourage each other.  The ride ended at a different transition location from the first one!  Something I’ve never experienced.

T2 was at a grade school and I actually put my bike in a bike rack used for kids bikes!  I swallowed a swig of water and was off to run.  The run was flat as well and wound in and out of a few roads around the lake.  This is when I really focus on passing people.  My least favorite part of this tri was that they did not write our ages on our legs because I usually enjoy looking at the ages of the people I pass and those who pass me, especially the women!  As long as the woman passing me is not in my age group, I’m good!  If a 23-year-old passes me I think “yea, they’re young and kid-less!” but when the 72-year-old passes me “oh…”

I ended up finishing 1st in my age group at 5th female overall, which I was pleased with especially because I did not feel as prepared this year.  Of course, all of the “real” hardcore athletes were competing in the Lake Placid Ironman that day!

Saturday I competed in the Pass It Along Triathlon in Lake Mohawk, NJ.  This was my first time to repeat a triathlon.  I competed in this last year and, I think because of that, I was nervous.  I wanted to do well!  As I was setting up my bike in the transition area I looked around and saw a number of pretty professional looking athletes.  Tri-bikes, those crazy torpedo shaped helmets, one piece tri-suits, ripped abs.  I was in trouble because I have no special equipment and my abs are rippled (as in what jello does when you shake it), not ripped!

We lined up on the beach ready to get in the water.  My age group was the second heat.  I spent my time waiting for our wave to go discussing how much we all hated the swim.  Well, most of us.  There were a few in the front splashing water on themselves and twirling their huge buff arms in circles to warm up.  The rest of us hung back, not wanting to touch the water until we had to.  The horn finally blew and we were off!  I felt pretty bad at first but soon got into a rhythm.  It was slow going, but consistent.  I managed to pass a few men from the first heat and was pretty excited about that until I saw that one of them was wearing a snorkel (seriously he was!).  Soon enough, I was running out of the water, happy as always to have that behind me! 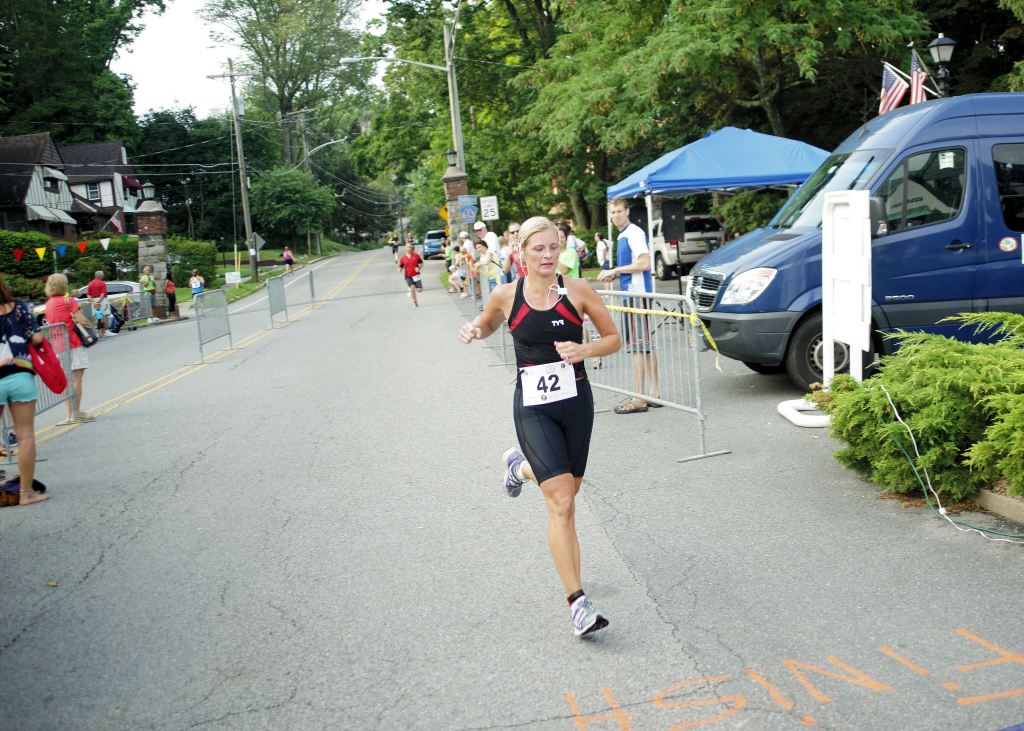 The bike route was hilly!  I passed a couple men right away and then was by myself for a long time.  About halfway through the ride two men and one woman passed me.  I checked and the woman was in a different age group so I didn’t care too much but I did pick up my pace.  I made it through the bike and transitioned to the run which immediately has an uphill section.  Definitely had brick legs through that section.  But suddenly I realized, hey I feel good!  I was able to pick up my pace and ran it pretty well; negative splits with a fast final mile!

I ended up finishing 2nd in my age group (same as last year) and completed the race one minute faster than last year.  I was happy and tried to tell myself that’s all that matters, beating your own time, but I guess I’m more competitive than that!  Immediately I started thinking of ways to improve and finish higher up next year.  As soon as I returned home I got online and began looking up other tris that I can do this summer.  Hopefully I can do at least one more.  I called my friend whom I often race with and told her to start planning, we were doing a triathlon soon.  Yup, I am addicted!

Triathlon is such a great sport.  So much better on your body (unless your doing an Ironman!) than a lot of other sports.  It’s FUN too!  The community is great and the atmosphere at the races is so supportive and fun, everyone is just happy to finish.  Anyone can do it, especially the Sprints.  I really encourage you to try it, just once.  Although, trust me, you will get hooked and want to do it again and again.

2 thoughts on “addicted to triathlon”