Early American hunters and traders traveling ancient, well-trodden paths in what is now Middle Tennessee, came upon a stone structure built on a peninsula created by the confluence of two rivers. Rock and earthen 4-6 foot high walls boarded the entire peninsula. This “old stone fort”, as they believed it to be, sat high on bluffs carved out by fast moving rivers and was protected by a moat on one side. They wondered who had built the impressive structure; thinking perhaps it was Buccaneers or Vikings or some other group of early Europeans, but no one knew for sure. The answer, when it was learned, shocked everyone. 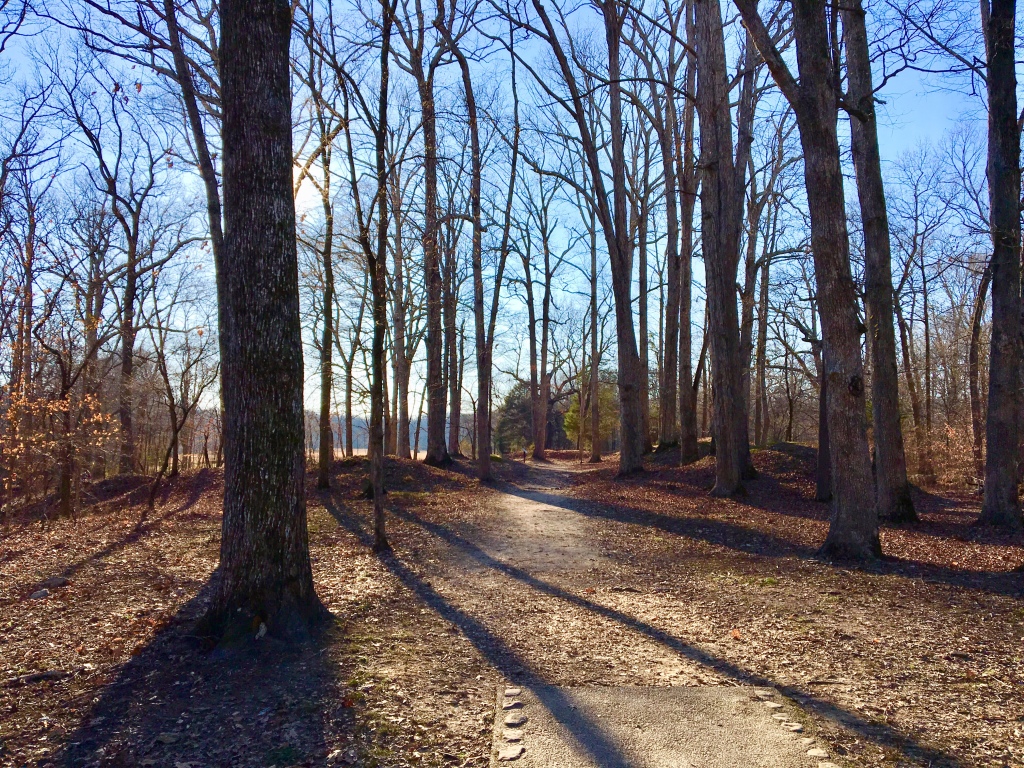 January 1st, 2018. Everything always seems so new and fresh and hopeful on January first, as though anything’s possible. I like to start the year with an adventure, hoping it will set the tone for the rest of the year. So, each year, our family does a First Day Hike. State Parks across the country offer these ranger-led hikes as a way to get out, explore, and start the new year right. This year we chose Old Stone Fort State Park.

The day was bitterly cold; wind-chills hovering in the single digits. Usually our entire family goes, but this year because of some sick kids and husband, only my 16 year old son and I ventured out. I bundled up- long underwear, multiple layers of clothes, wool socks, hat, two pair of gloves, face mask, boots, and hand warmers- so that when I was finished, only my nose was showing. My son threw on a fleece, hat, and gloves because he “doesn’t get cold”, and we were off.

I had often passed the brown signs on the highway for Old Stone Fort State Park, but this was our first time at the park. We arrived and went into the museum where I was surprised to see so many people waiting to go on the hike on such a cold day. We all signed in, finished putting on hats and gloves and scarfs and boots, met the ranger, and were off, back into the cold. There ended up being 41 people and 1 dog on the hike which made me happy to see that so many others liked the tradition as much as we did, cold and all!

The hike was a 3 mile loop that followed the rivers. The peninsula that the park is created around is formed by the confluence of the Duck River and Little Duck River. This river system spills over a shelf in the Cumberland Plateau known as the Highland Rim and rapidly drops in elevation as they approach their convergence. This has led to deep gorges cut in the limestone around the peninsula. There are a series many rapids and waterfalls, one of which was our first stop. This was the site of one of a few mills and factories that were built along the river in the 1800s, harnessing the Duck River’s power. We all took picture as the biting wind blew off the water, and then quickly moved along.

The hike continued, heading down now out of the wind, to the fork of the Duck and Little Duck River. We turned to now follow the Little Duck River whose banks were edged with ice as were rocks protruding from the middle of the river. Yet it was a beautiful location. High bluffs behind the river gave privacy to the boulder and tree lined river. It was the perfect spot to wile away a warm summer day- hammock strung between two trees, fishing, napping, and enjoying the peaceful sounds of the river and forest. But not on January 1st! My son and I vowed to come back in the summer!

The Little Duck turns sharply here, forming a horseshoe. We followed it until we came to the base of a narrow ridge. The trail turned and we began to climb away from the river up the spine of the ridge. We could now see why the trail we were on is named Backbone Trail. We hiked along the narrow ridge, the river far below us on both sides. Then it was back down the spine. 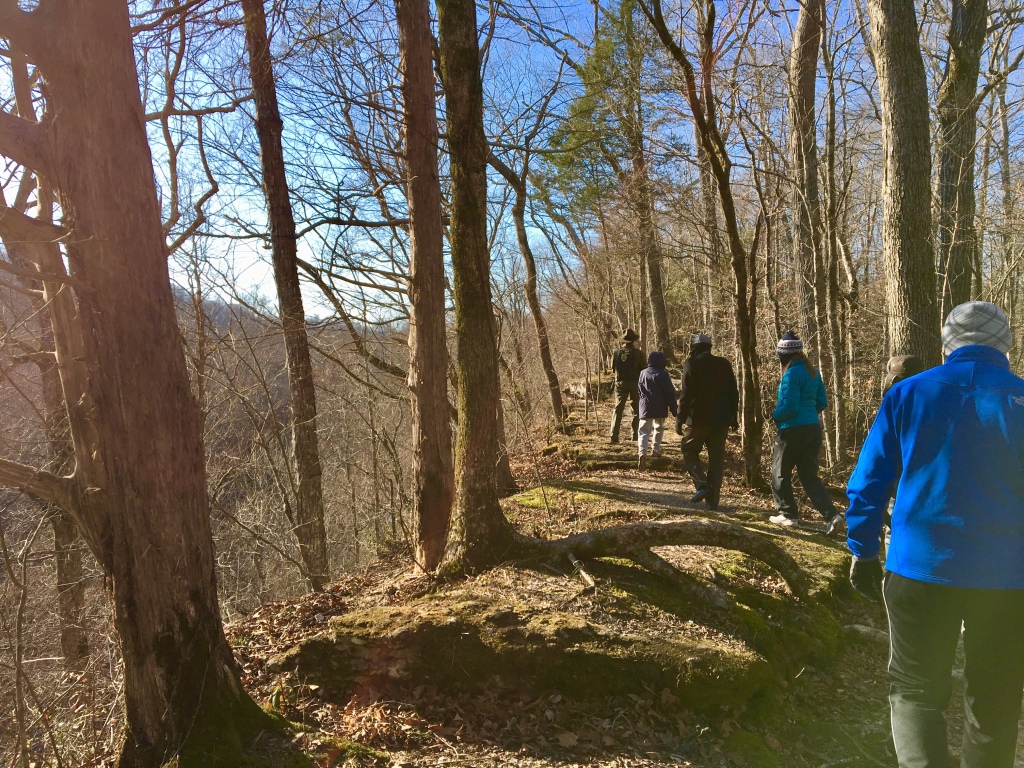 Back in the bottom of the forest again, we reached the Moat Trail; a narrow flat open section. This was where early settlers thought the ancient moat that protected the fort was located. But it never was a moat at all! Our ranger told us that they actually think the Little Duck River once flowed here before, at some point, it rerouted to where it is now. We followed the moat/riverbed for awhile and then the trail turned and climbed sharply. This is the steepest section of the trail, heading up and out back to the Old Stone Fort high on the peninsula. The trail continued with the open grassy area that was the supposed fort on our left and the river flowing through rapids and more waterfalls far below us on the right.

And then we learned the truth! This was not an old stone fort as was once thought, but rather an ancient ceremonial site dating back to 30-430AD. Native Americans, not Europeans, had built this gradually over several hundred years. This was before the tribes of Native Americans that we know today even existed. It is thought that no one ever lived here, but would journey to the location for ceremonies. They have found that the sun rises perfectly down the center of the path into the site during the Summer Solstice. A very sophisticated design well before it was thought there were sophisticated people in the United States! Now a great state park with a completely misleading name!

You can learn more about the park here. Go and visit it, you won’t be disappointed!